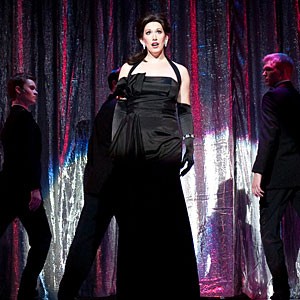 Maybe I'm one of only a handful of people who have never seen the classic 1954 movie, “White Christmas,” starring Bing Crosby and Danny Kaye. But even so, 10 minutes into the extravagant stage adaptation currently playing at the Empire Theatre, “Irving Berlin's White Christmas,” I could pretty much predict the entire plot. There would be highly improbable romance, complicated by an entirely avoidable misunderstanding, resolved in heart-warming fashion right before the final curtain.

Given the intransigency of this formula, the challenge for director Patti D'Beck is in making the ride from beginning to preordained end an enjoyable one. And D'Beck ultimately succeeds, thanks to a few knockout performances, the nifty staging of a couple of song-and-dance numbers, and the reliable nostalgic punch of Irving Berlin's beautiful music.

But this success is uncertain early on. A bit of meander plagues the show's exposition, where we meet the duo Bob Wallace (played by Kevin Early) and Phil Davis (Freddie Tyson Kimmel) who started performing in the Army during World War II and have become national celebrities since. Only when Phil's mischievous pursuit of a hot new sister act lands the entire cast and crew in a small lodge in Vermont owned by their former general (Barry Pruitt) does the energy really start flowing.

The kick-start is provided by Kathy Halenda as Martha, the inn's manager. With a stage presence as big as her Ethel Merman-esque voice, Halenda belts out “Let Me Sing and I'm Happy,” the evening's first showstopper. After this number, the production fires on all cylinders. Songs such as “Count Your Blessings Instead of Sheep” and “Blue Skies” showcase the stunning range and power of Early's voice. Kimmel's deft footwork lights up the brilliantly staged “I Love a Piano,” a duet with the adorable Michelle Lookadoo, who plays Phil's love interest, Judy Haynes.

The second half of the sister act, wary-of-love Betty Haynes (Andrea Rivette), gets her moment to shine with the smoky “Love, You Didn't Do Right With Me.” While the pairing of Phil and Judy is played mostly for laughs, Early and Rivette share a sweet chemistry that makes you root for Bob and Betty regardless of their affair's somewhat silly machinations.

Exquisite moments of charm and hilarity sneak in thanks to Taylor Richardson as the general's precocious granddaughter and Steve Moore as Ezekiel, the inn's slow-moving handyman. Costume designer Sue Griffin has the players in gorgeous duds and the flash and dazzle of the production reaches its apex with a truly moving finale, complete with plenty of snow. Be patient with “White Christmas” early on and you'll be captivated by the end.