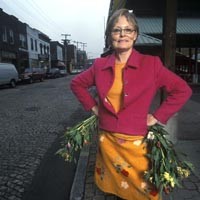 As the city continues to search for a new manager to take over the 17th Street Farmers' Market, the entrepreneur who revitalized the Shockoe Bottom mainstay in the late 1990s is interested in her old job again.

Kathy Emerson, the market's manager from 1998 to 2004, has been the talk of vendors and advocates of 17th Street for weeks. On Tuesday, she told Style that she has officially expressed interest in the job with the city, and would like to spearhead its revival.

Emerson, who turned the market into an event-driven experience with tomato and Brunswick stew festivals and other arts-centric events, says the recent organic foods movement and the opening of other local markets make 17th Street prime real estate for a full-scale renaissance.

An artist by trade — she cut her teeth working at Virginia Commonwealth University's Anderson Gallery and designing jewelry — Emerson, 61, most recently launched Quirk Gallery on Broad Street in 2005.

“I am most interested in returning to the position of manager of the 17th Street Farmers' Market, but I was too late. I did not apply for the position when it was posted with the city,” she says. She met with the director of the city's Economic Development Department, Carthan Currin, on July 31 and expressed interest in applying for the job if it reopened.

“I think it's remarkable,” she says of the farmers' market, established in 1737. “She's the mothership.”