K'Naan at the National 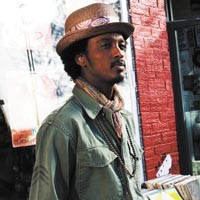 Having spent the first 13 years of his life growing up in the civil unrest of Mogadishu, Somalia, in the '90s, it's not all that difficult to understand why rapper K'Naan's lyrical output has nothing to do with the thuggish posturing of most modern hip-hop artists, focusing instead on politics, war and freedom. His debut album won the Juno Award for Rap Recording of the Year, and his latest effort, “Troubadour,” ups the ante with more street-smart plaintiveness. While rapping about his first childhood crush being kidnapped by soldiers, K'Naan makes clear on the track “Fatima” there are more important things in life than a new Escalade. K'Naan performs the National on Wednesday, July 22, at 7 p.m. $13-$15. 612-1900. — Mike Hilleary