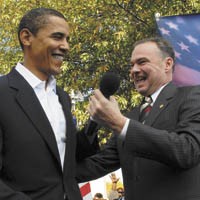 President-elect Barack Obama has tapped Gov. Tim Kaine to lead the Democratic National Committee, according to a report by the Politico.com's Mike Allen.

The pick is a bet that an energetic younger leader will help the party capitalize on the historic enthusiasm that swept Obama to his landslide win. ...

Kaine has long one of the party's rising younger stars, even delivering his party's nationally televised response to one of President George W. Bush's State of the Union addresses.

The governor won handily in a traditionally Republican state in part with frank conversation about his Roman Catholic faith. His victory in the state's exurbs is viewed as a model for other Democrats.

Kaine was an early and enthusiastic supporter of Obama's. He took to the campaign trail outside Virginia and helped Obama win this traditionally Republican-leaning state.

Some people had speculated about Kaine's future in the Obama cabinet, while considering his potential fit as a replacement for the retiring Eugene Trani, president of Virginia Commonwealth University.