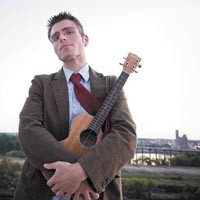 His days are spent as a business lawyer at Hirschler Fleischer, but with a name like Justin Laughter, it only makes sense that he also plays guitar and writes songs in a children's band called Silly Bus.

“As a songwriter, it just seemed like a more noble endeavor,” Laughter says. “And the kids really respond.”

He also finds time to serve on the board of AMP! Metro Richmond, a student mentoring program, and the steering committee of YRichmond, which recruits business talent to the city.

Silly Bus has released three full-length albums and its songs are broadcast nationwide on XM Radio. The band performs for thousands of kids a year at events such as the Richmond Marathon, the Richmond Kids Expo, and the Ukrop's Monument Avenue 10K. But the gig is a little different from that of a typical rock band.

“We get up at 5 or 6 in the morning, get to the gig at 7 a.m., play and are done by 11 a.m. Kind of a reverse world,” Laughter says.
Laughter also recently became a member of the National Academy of Recording Arts and Sciences, which makes the annual Grammy awards. Look for his most recent album, “Alphabet — Volume 2,” out now.