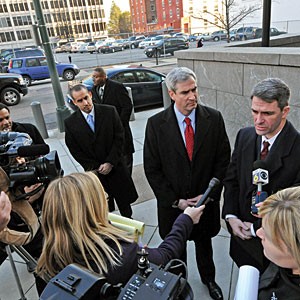 There was an air of finality as developer Justin French pleaded guilty to two felony counts of wire fraud and unlawful monetary transactions in U.S. District Court Monday. He faces up to 30 years in prison, restitution and as much as $500,000 in fines. Sentencing is scheduled for May 3.

The two counts involve French using the state and federal historic tax credit programs in developing a commercial building at 1509 Belleville St. French informed First Market Bank officials that construction costs would be no more than $275,000. When it came time to apply for tax credits, he told the Virginia Department of Historic Resources the construction costs were $1.57 million. French was then awarded $555,976 in state and federal tax credits based on the $1.57 million, according to court documents, which he sold to investment partners, including Markel Corp.

The overall case is much more complex. French pleaded guilty to a much broader scheme involving between $7 million and $20 million in tax credit fraud. Since 2005, French has developed 20 properties using state and federal tax credits, according to the plea agreement. He had another 16 projects in the pipeline.

The official charges detail only the Belleville Street property, meaning the saga that began in August with federal and state authorities raiding French's Shockoe Slip offices may have just begun.

"This remains an ongoing investigation," says Neil H. MacBride, U.S. attorney for the Eastern District of Virginia, speaking to reporters after the hearing Monday. "We can't comment further about where the investigation is going today."

Also unclear is what happens to the state and federal tax credits that have been spent. During the next few months investigators will work with the various investors and other "victims," MacBride says, to determine the scope of the fraud.

As part of the plea agreement, French must forfeit more than $7 million in assets and property, including several pieces of art, his house on Oak Lane and his Shockoe Slip offices. French, 40, who appeared in court in a black suit, remains on bond until his sentencing.