From machine guns to real estate. 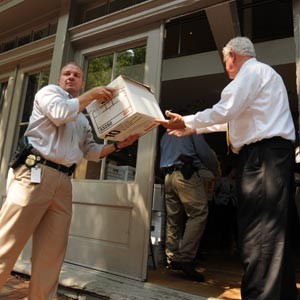 While the Justin French saga begins to unfurl, a key question surrounding the 39-year-old developer is elusive: Where did he come from?

His meteoric rise onto the city's development scene runs counter to Richmond's slow-to-accept-newcomers culture. And it's likely that few were fully aware of French's past.

French  spent almost two years in federal prison after pleading guilty to firearms and cocaine trafficking in September 1994. He was 23 and attending law school at George Mason University.

French and a roommate, Jon Doyle, worked in tandem, federal agents alleged, converting semiautomatic pistols and AK-47s into fully automatic machine guns, and then selling them. French and Doyle used drivers' licenses photocopied from a car dealership in Arlington to register the firearms under false names, according to agents with the Bureau of Alcohol, Tobacco and Firearms. The scheme allowed the buyers to circumvent background checks, according to records obtained by Style Weekly.

ATF agents purchased 25 pistols and shotguns for $2,550 and more than a pound of cocaine, court records reveal. French and Doyle informed the agents that they would then sell the cocaine to a friend in Virginia Beach who distributed the drugs, according to court transcripts.

French was born in San Diego, and shortly after his parents moved to Virginia Beach, where French graduated from First Colonial High School. He enrolled at Old Dominion University, graduating in 1993 with a degree in criminal justice. He apparently dreamed of becoming a corporate attorney, at one point telling an undercover agent that he was into real estate and wanted to get into corporate law. “I know a lot of realtors and everything,” he told an undercover agent.

French spent fewer than two years in prison, and was released Aug. 5, 1996. He moved in with his grandparents, Ernest L. Hazelwood Sr. and his wife, Susie, on Denbigh Drive just off Cherokee Road in Richmond. He filed for bankruptcy to absolve outstanding student loans and other debts, and got a job as a front desk clerk at the Jefferson Hotel. In July 1997 he landed a job as a loan officer with Westover Investment Corp., jump-starting a career in real estate.

Federal authorities raided the developer's offices in Shockoe Slip on Aug. 5 as part of a broad investigation into French's finances and business dealings, and possible abuse of the historic preservation tax credit program, sources say. A day after the raid the Bank of Hampton Roads filed a lawsuit against an architect on two of French's projects in Scott's Addition, charging that the architect signed off on fraudulent disbursement requests totaling $15 million.

The recent questions surrounding French's real estate developments shouldn't come as a surprise, according to a source with a local financial institution, who spoke on condition of anonymity. French had attempted to secure a loan with another bank about four years ago and was rejected because his loan application listed properties with rent income that were vacant or boarded up, the source says: “Bankers run from that kind of thing like the plague.”

An attorney for French declines to comment. It's also unclear as to French's whereabouts. Richmond Biz Sense, an online business magazine, reported Saturday that French had no idea the federal raid was coming, and that he maintained his innocence. Officers at the scene Aug. 5 told Style that French was scheduled for a 10 a.m. meeting at his office, in the 1300 block of East Cary Street.