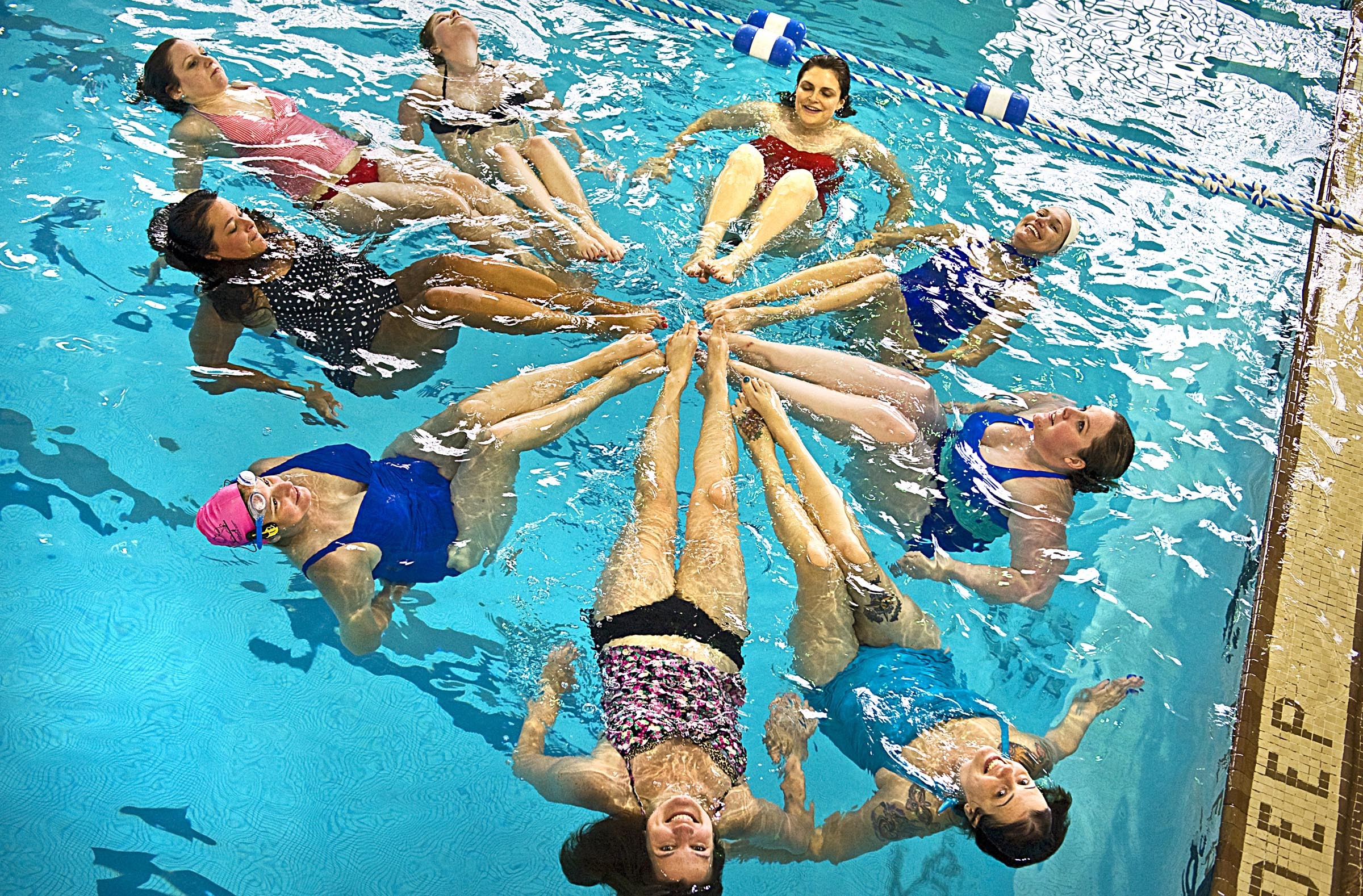 In the downtown YMCA pool, the women float on their backs, treading water. A 32-year-old woman, Amy Bartels, walks along the poolside, coaching:

The women suddenly fold up in pikelike motions with their arms and legs pointing straight up, their bodies simultaneously dipping below the surface.

To a bystander, they might appear to be doing water calisthenics. But their movements are more rhythmic and balletlike. Their faces remain out of the water, usually smiling. They're having fun.

"The example that most fits what we're trying to do is Miss Piggy's water ballet scene from one of the original Muppet movies," says Karen Kersting, a 35-year-old doctoral student at Virginia Commonwealth University who also teaches an undergraduate psychology of women course. "That kind of pretty, old-fashioned, Esther Williams synchro is really the idea."

Williams, a Hollywood actress from the '40s who helped popularize the sport, died this summer — a fact not lost on Wendy Carter, a professional synchronized swimmer on hand today to help provide lessons.

"They're just learning the basics now and having fun," Carter says, adding that she's always on the lookout for new talent.

Carter is a professional actor and singer who lived in Hollywood and helped with synchronized swimming in commercials and films. "I taught Steve-O from 'Jackass II' to do water ballet," she says, laughing. "The whole retro thing is really catching on all over the place. It's great entertainment for a party. L.A. has the Aqua-Lillies."

Carter drills the swimmers briefly and then darts off to sing jazz at C'est Le Vin restaurant in Shockoe Bottom while Bartels takes over.

The idea for River City Magnolias began after Kersting saw a video of the Brooklyn Peaches, a retro group featured on the feminist website Jezebel.

"I thought, 'I want this in my life,'" says Kersting, who's also a former journalist for Bloomberg and the National Geographic Channel. She'd done some synchronized swimming growing up in Wisconsin and was looking for a new fitness outlet after initially considering girls' roller derby. "But I'm clumsy and not so into broken bones," she says. "This had a similar retro, body-positive, girl-power, vintage aspect to it that seemed to fit Richmond's historical culture. ... People say it feels like pilates in the water."

Kersting posted about the group on Facebook and was surprised to discover immediate interest. Twenty women contacted her and about a dozen began showing up for regular practices on Thursdays at the downtown YMCA pool, an original structure built in 1942. There's even a historical photograph on the wall from the era featuring a women's synchro team, which has served as inspiration.

Water ballet dates back in this country to 1933, when the Modern Mermaids performed for the World Exhibition in Chicago. It became an official Olympic sport at the 1984 Summer Olympics in Los Angeles. But the River City Magnolias aren't competitive. "We're more body positive," Kersting says, similar to groups in Brooklyn, N.Y., and Portland, Ore. "But it would be fun to have multiple Richmond teams at other local Y's," she adds. "Maybe we could have battles."

Bartels recently moved to Richmond and says she joined purely for fun. "I did competitive synchronized swimming growing up and wanted something without that kind of pressure," she says. "Plus this is accessible to a lot of women."

A former aquatics director at the YMCA, Brianne Norris, joined the group and says the women have learned about 10 basic moves since they began meeting in mid-June.

In theory, it's open to anyone — not just women. But for now the group, consisting of women mostly in their 20s and 30s, is full for the summer and will accept new members in the fall. Kersting says they are working to get matching vintage swimsuits and white-flowered swimming caps.

And there may be a performance by the end of the summer. It would be a fundraiser for a woman-focused organization in town, most likely Planned Parenthood, Kersting says.

"It would be cool to have a pool party with food trucks and a performance," she says. "But we'll still probably only have five minutes of material." S