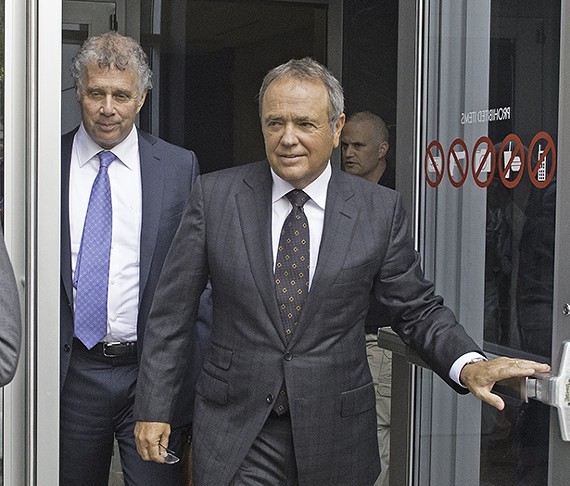 For sale: A 14,700-square-foot mansion and a total of 61 acres of property in middle of the prestigious Hermitage Golf Course in Goochland County.

The owner? A trust associated with Jonnie R. Williams Sr., the nutritional supplement salesman whose testimony to federal prosecutors led to the criminal corruption convictions of former Gov. Bob McDonnell and his wife, Maureen, last year.

The property is listed for $4.9 million, says Susan Cullen, a realtor for Long & Foster. A full page-advertisement for the property is featured in the latest edition of the glossy magazine Estates & Homes -- although Cullen declines to make photos available to Style.

“It’s been on the market for about a week,” says Cullen, who won’t say whether Williams still lives there or where he resides.

The property at 1 Starwood Lane is described and pictured in the advertisement as a Georgian-style mansion including six bedroom suites on three levels; a wood-paneled executive library; sauna, billiard and media room; state-of-the-art, high-security vault; pool and gazebo. It’s located on 28 acres, but the deal includes four lots of an additional 35 acres.

Cullen says that the original selling price about a month ago was $5.5 million and didn’t include the four additional lots, which she says makes for a great deal. Now the asking price is $4.9 million.

Testimony at the McDonnell trial revealed that Williams developed a close, personal relationship with Maureen McDonnell and later with the former governor. He gave the McDonnells and their family more than $177,000 in loans, stock, gifts and vacations, including a $6,500 Rolex for the governor.

In exchange, according to testimony, the McDonnells pushed Anatabloc, an anti-inflammatory salve made by Star Scientific, a company headed by Williams. Maureen McDonnell held a launch party for the substance at the Executive Mansion and Bob McDonnell tried to interest state officials in researching its effects.

McDonnell was sentenced Jan. 6 to two years in prison on 11 counts of conspiracy to commit fraud. His wife was sentenced to a year and a day in prison for eight similar convictions Feb. 20. An appeal of the convictions will be heard May 12 at the U.S. 4th Circuit Court of Appeals in Richmond.

At the six-week-long trial that drew international attention, Williams was described as a free-spending, glad-handing salesman who moved from one business scheme to another, often leaving behind considerable damage. In exchange for his testimony against the McDonnells, Williams was granted immunity from prosecution in the case and in another pending case that involved securities fraud.

Williams is said to have properties in the Bradenton and Sarasota, Florida, areas. Before the trial, he left his position as head of Star Scientific, which changed its name to Rock Creek Pharmaceuticals. Rock Creek has moved from Henrico County to Florida near Sarasota.

Last month, the McDonnells listed their six-bedroom house for $944,000. At more than 5,000 square feet, it’s in the Wyndham subdivision near Short Pump. It sold in less than a week.