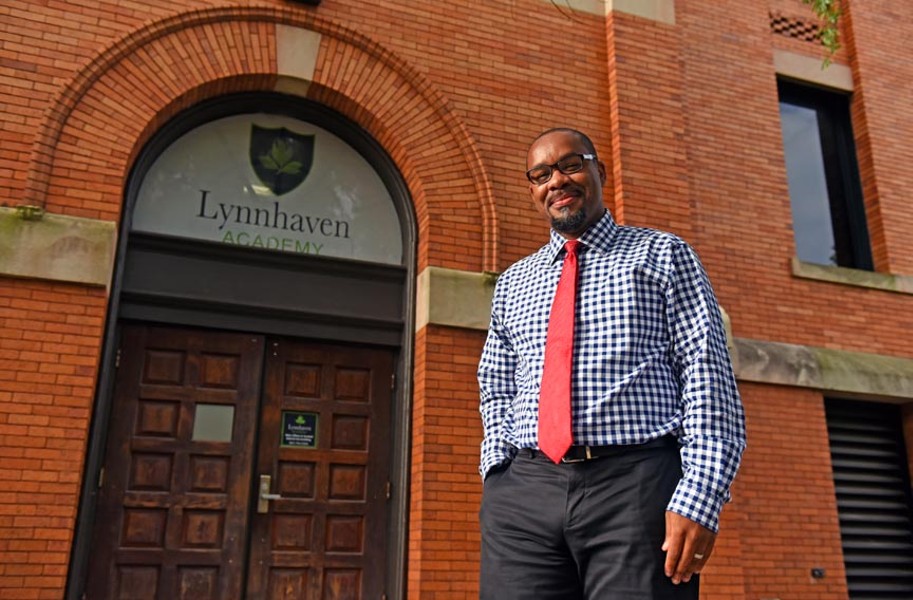 Johnathan Harris was in a panic last summer. The space he’d lined up for his growing school suddenly wasn’t available — a zoning issue was discovered too late.

“I had 21 days to spare until Sept. 6,” he says. “I had to pack everything back up and kept it on a U-Haul.” He contemplated what it would look like to close the school that had been his life for three years.

But a chance trip to the Virginia Museum of Fine Arts with a young family member — a budding sketch artist — took him past the former Benedictine High School building in the Museum District. A few calls to the Catholic Diocese of Richmond later, the first floor was his.

“It was a complete mess — the ceiling tiles, the floors, boxes everywhere,” he says. “[In those few weeks] I’m laying carpet, I’m painting walls, literally washing windows and mopping floors.”

It’s a story that explains Harris’ life: a little bit of chance, born of helping a kid, combined with a lot of hard work and tenacity.

The Bedford County native moved to Richmond to teach in the region’s schools in 2003, not long after he and his wife began raising a nephew after Harris’ sister died.

“He had dyslexia and struggled to succeed in traditional school environment,” Harris says. “I taught a lot of kids like that.”

So after years as an educator and education consultant, he opened the school to serve youth like his nephew — a school Harris wishes he’d attended himself as a student.

It’s named for his sister, whose middle name was Lynn.

“At Lynnhaven, it’s OK to march to the beat of a different drummer. We embrace that,” he says. “I wanted to build a school that encouraged creativity, developed social responsibility, self-reliance — a hands-on environment.”

That means personalized instruction in a small learning environment and a focus on the arts. “You take any classroom with 30 kids in it and you’re going to have 30 different learning styles,” Harris says.

Lynnhaven Academy started with one student in 2012 and graduated its first class of seven in 2014. Now in the new space, Lynnhaven educates 38 students from grades three to 12 and can continue to expand.

As Harris says, “This is my dream job.”

Editor's note: This profile is updated from the print version to clarify that the school works with students who may struggle in a traditional learning environment.