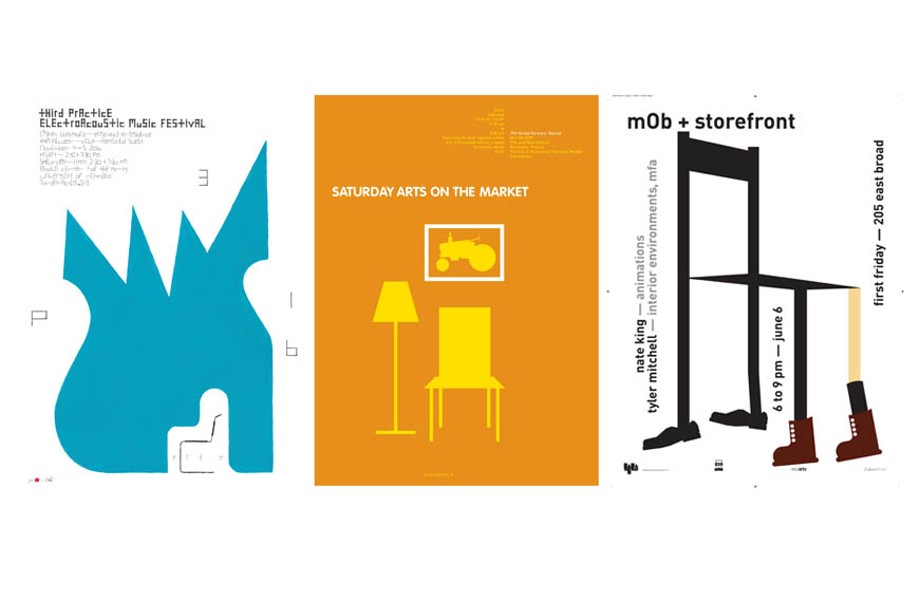 Color, clarity and wit are characteristic of Malinoski’s graphic work.

He’s a graphic artist whose bold designs have interpreted and celebrated a range of Richmond activities and events for 28 years.

John Malinoski produced scores of eye-catching promotional pieces for the 17th Street Farmers’ Market. Graphically, he took objects as familiar as a tomato or vernacular objects associated with farming and made them uniquely heroic, yet playful.

Similarly, he uses only essential elements in his recent designs for the University of Richmond’s Third Practice Electrocoustic Music Festival, while conjuring imagery full of wit.

When Style invited Malinoski to reflect on his life in design, he quickly revealed his inner aesthete. He suggested that the conversation take place in a modernist setting, perhaps in a space designed by Richmonder Sanford Bond, a principal with the 3North Architects — for whom Malinoski designed the original identity mark.

So on a brisk winter afternoon, Malinoski sat in a conference room on Grove Avenue at the Bond-designed Studio School of the Virginia Museum of Fine Arts.

Wearing a well-worn wool cap, a heavy-knit sweater and distinctive but understated eyeglasses, he looked more like a rugged Dutch boatman than a longtime professor of communications design. Until recently he also taught at Virginia Commonwealth University’s School of the Arts, sharing his knowledge and critical thinking with thousands of students.

Malinoski, 59, was born in Mayville, a small western New York burg in the orbit of Buffalo. His mother was a librarian. His father taught physical education and coached high-school sports.

“I grew up in a locker room and began to think about what makes a uniform,” he says. “There are large block letters in a sans-serif typeface and bright colors. Stripes are important but otherwise, there’s not too much patterning.”

Soon, he says, these observations gave way to deeper meanings: “It is your colors versus their colors.” In other words, deceptively simple and diverse graphic elements can actually mean and communicate things that are quite real.

Also while growing up, Malinoski says he was drawn to the distinctive pictographics used in sports programming when he watched the Olympics on television. But because the school he attended was small and short on art programs, as a boy he drew outside of class, mostly comic figures taken directly the printed page — “complete forgeries,” he says.

“Charlie Brown” was a favorite and Malinoski began to suspect that something beyond the purely visual was happening. “They could be dark,” he says, realizing that Charlie, Lucy, Linus and Snoopy were channeling deep meanings.

Malinoski’s first formal training in art was an elective drawing course his freshman year at St. Bonaventure University, where a professor, Cole Young, sensed talent and encouraged him. “It was the first time someone had breathed [in me] some recognition,” he says.

Later, while studying at Suny at Fredonia, Malinoski worked with Paul Bowers, a professor who directed small a graphic design program.

“He was demanding, super critical — tough love,” Malinoski says. “But he introduced me to a language that hit me really well, Swiss graphics: It was form for form’s sake.”

Malinoski hits the table for emphasis. “He opened doors,” he says. “I am indebted forever.”

Following Fredonia, Malinoski worked for two years as a graphic designer for the New York State Council for the Arts, supported in part by the federally funded National Endowment for the Arts.

“Things were just paid for,” he says, citing such graphic design projects as a poster for the Count Basie Orchestra.

Malinoski entered graduate school at the Rochester Institute of Technology, where two additional modernists and devotees of the Bauhaus thinking about design were his mentors, R. Roger Remington and Heinz Klinkon.

“I was hit on both sides,” he says. “Klinkon asked me these humiliating questions to which there were no answers.”

“I still love the smell of I.M. Pei’s concrete buildings.” (The firm also designed the East Wing of the National Gallery of Art in Washington, and Boston’s John Hancock Building, as well as the McLothlin Medical Building on the VCU medical campus.)

In 1989 Malinoski arrived in Richmond to teach at Virginia Commonwealth University. It was there that he met his wife, Kristin Caskey, a professor in the university’s department of fashion design and merchandising. They have a 14-year-old daughter, Lulu.

In addition to his studio and classroom he and two colleagues established Middle of Broad, known as mOb. Working with the nonprofit Storefront for Community Design in the Downtown Arts and Cultural District, the program links mostly organizational clients of limited resources with interdisciplinary designers.

“It’s essential what it does,” Malinoski says. “Organizations from outside the design field can go away with a hatched idea, a plan, an identity mark, a plan and a budget. An interdisciplinary team helps put the first stroke on the canvas.”

Having successfully ended his tenure at VCU, Malinoski is retooling for his next chapter. When he left the university in May, he turned in his digital material the state had lent him.

“I didn’t have access to the software anymore, but I still want to do graphic design,” he says. “So I’ve gone back to using my skills and drafting materials. It doesn’t expedite the job like computer-assisted design, but there is more time for critical thought. If you make an error in the pigment, you can’t wipe it out. You can’t scale things up or down.”

“The work is refreshingly crass — and that’s good,” he says. “You don’t have the same tools, but it’s more a more reflective process that’s not dictated by an external source. You think while the line is being drawn. You can’t get that feeling with digital. It’s kind of nice. As a graphic designer you’re in your own place. So it’s truer, in a way.”

“I’m of the age that still has the manual skill set,” but that poses a question “Does it go with me? Is it all right if it does go with me?" S