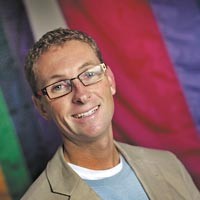 When John Dougherty moved to Richmond eight years ago as a family therapist, there was one massive piece missing from the help he had to offer.

“I had no idea that if I had a gay kid who walked through the door, that I'd have a place to send them,” says Dougherty, who had only just come out, informing his friends and family that he was gay.

“Talking about sexual and gender identity is just something [Richmond family services providers] didn't do then,” he says.

After five years of frustration, Dougherty got the chance to do something about it. Shortly after discovering the Richmond Organization for Sexual Minority Youth — at the time a struggling organization that was close to its last dime and without a place at the table of local service providers — he took over as the organization's director.

“When I stumbled on it, I had never even dreamed of something like this when I was growing up in rural New York,” Dougherty says. He dove headlong into the work of rebuilding the organization and claiming that seat at the table. In addition to a number of successes, next week the organization will accept a Richmond History Maker award for improving social justice from the Valentine Richmond History Center.

Dougherty's goal is to relieve future generations from the stigma he felt growing up gay. “If someone had given me words to describe what I was feeling, and to say those are OK feelings, how might that have shaped me as a person and my relationship with my family?” he says.

When a kid walks into the ROSMY office, confused and scared, Dougherty knows he's doing right: “There's a sigh of relief as they walk through the door and realize they can be completely honest, that they can say ‘This is who I am.’”