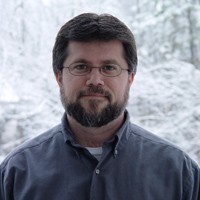 Family: I will have been married to Beth for 19 wonderful years in August. We have 5 children, ages 16, 15, 12, 10, and 5 … Four girls, one boy. They currently attend four different public schools. Our newest addition (child #6) is due in September.

He will likely be in the Clover Hill High School Class of 2026!

Profession: I work in information technology with a locally based financial company.

Where do you live? (city and neighborhood) Brandermill - Midlothian.

Where did you grow up? Campbell County, VA

Why are you running as an independent?
Even if I had a strong connection with a particular party's ideals, I have an even stronger belief in keeping partisan politics as far away from our public schools as possible. I don't agree completely with the platforms of any of the major political parties, so I don't give them my allegiance or my money. There are very good reasons for school board elections to be conducted in a non-partisan manner

Why aren't you running as a Democrat or Republican? Hmmm… Didn't you just ask that question?

Anyone in public office must understand the workings of today's established two-party system to be effective. However, I strongly believe that one does not need to be a part of that world of partisan politics in order to be successful working within it.

In the business world, I have been very successful in earning both the trust and respect of my colleagues. I did this by being honest and straightforward with my own opinions, and by offering well-reasoned solutions that I felt were in everyone's best interest. Often, in the absence of such an independent mediator, the result is a simple stalemate between the opposing sides. Nothing good comes of that.

What are your signature policies and campaign issues?
I certainly have a vested interest in ensuring quality public education in Chesterfield well into the future (see "Family" section above.) I also have a successful career in the business world, from which I have accumulated a wealth of practical management experience that would serve me well on the school board. In addition, I have been engaged in volunteer service for many years within local schools, youth organizations, and neighborhood groups, and I think my current campaign is part of a natural progression from those responsibilities.

It's often stated that Chesterfield County has excellent schools. Although this is true, I believe the Chinese proverb that states, "You cannot propel yourself forward by patting yourself on the back." There will always be room for improvement. The specific issues on which I'm basing my campaign are far too complex to describe here. For details, please take a look at my web site (http://home.comcast.net/~Bradner_2007), which is updated frequently based on questions I receive from the public.

Of course, I also believe it's high time for a change in our representation from the Clover Hill District, and I would be honored to serve. In short, my actions in office would be based on what I call the "D.I.A.L.O.G.S." principle:

I believe this simple premise could go a long way toward making positive changes where they are needed in Chesterfield.

Which political party do you more closely identify with? None. I am adamantly and proudly independent, as every school board member should be. If elected, I will represent the interests of the "red" homes as well as I represent those from the "blue" and "green" homes.

How do you differ most from them?
Neither party is always right, and neither is always wrong. As an independent, I can focus on ensuring even greater success within Chesterfield County's public schools and on doing what's in the best interest of the children, teachers, parents, and citizens of the Clover Hill District - without being obliged to follow any strict party line.

What changes would bring you into the Democratic or Republican fold? None - At least, not as long as I am a school board representative.

How did you arrive at your political convictions? Observation, education, and experience.

Are you running to win, or running to bring attention to certain issues? Both! What's the value of reaching one goal without the other?

Rest assured, I would take this responsibility very seriously. The Chesterfield County School Board is entrusted with guarding the best interests of nearly 60,000 young people, over 7,000 employees, more than 60 schools, and a half-billion dollar operating budget. To put it bluntly, this is not child's play.

Who is your political hero? I have an interesting trio of political heroes: Benjamin Franklin, Mahatma Gandhi, and Sir William Wallace (Have you ever seen the movie, Braveheart?). To me, these gentlemen represent true dedication to independence, and in turn, they symbolize the outstanding ideals of intelligence, self-discipline, and courage.

Is it wrong to steal office supplies?

What kind of car do you drive?
A green 1996 GMC Sierra Extended Cab Pickup. It still runs great, and so do I. Honk if you see me on 360 or the Powhite!