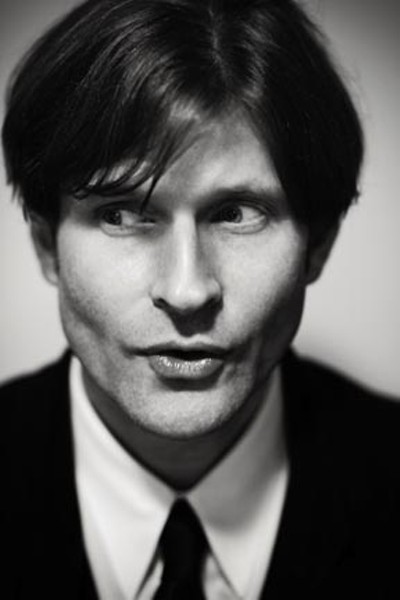 "I would prefer not to."

Those who came to see actor Crispin Glover at the Byrd three years ago know that the films he directs are truly strange. It isn't surprising, considering the 49-year-old is on the short list of quirkiest actors in Hollywood history.

The man who's brought to life such characters as George McFly ("Back to the Future"), Layne ("River's Edge") and Cousin Dell ("Wild at Heart") is returning to show the second film, "It is Fine! Everything is Fine" (2007), of his uncompleted trilogy. The surreal, psycho-sexual film was written by Utah writer and director Steven C. Stewart, who died from complications of cerebral palsy.

Glover also will again perform his "big slide show part two," featuring self-published collage-texts created by repurposing photos from the 1800s that he found in bookstores off Hollywood Boulevard. Always a gentleman, Glover happily answers questions at the event and signs copies of his books that he sells at the show.

Busy working in Europe on several films, the actor spoke briefly with Style Weekly (in his own playful way) through email from his studio and home in Czechoslovakia.

Style: Over Halloween, they were showing all the "Friday the 13th" films on IFC. I watched your spastic dance scene from part III and was amazed. It's the only redeemable thing in the entire movie.

Glover: The dance is more syncopated than it might seem. The original music was AC/DC's "Back in Black." I asked them to play that for the actual filming of the scene — which they did — but the music they used in the soundtrack was something that was less syncopated to the dance. It was always an unusual way to dance, but probably made even more unusual by the nonfitting music.

I have owned it for many years now and it has been in a state of work to get both the chateau ready for housing the crew members and cast when I am shooting my own productions and the 14,000 square feet of former horse stables that are now the shooting stages where the sets have been built. When people hear I am coming to my chateau they always say, "Have a great time!" as though I am going on vacation. But I actually have way more difficult work here than at my house in L.A. ... The village of Konarovice that surrounds the chateau is a little bit difficult to find for an average American. Especially with the Czech language barrier. Things here are generally a bit more difficult to get done.

What was your reaction when actress Karen Black died this year?

I liked working with Karen Black. I admired her performances in "Easy Rider," "Five Easy Pieces" and "Day of the Locusts." She was an interesting, attractive and intelligent woman. I had worked with Dennis Hopper as well and of course he had directed her and acted with her in "Easy Rider." I remember her saying positive things about Dennis Hopper. I somehow equate the two of them together, and am saddened that they both died what seems to be too young. Strangely, Gary Coleman died the same week as Dennis Hopper, and the first screenplay I had written was something that both Gary Coleman and Dennis Hopper were to be in. ... It is too bad they are all gone. I should regard them as unique, separate individuals, because of course they are.

What techniques from directors that you have worked with do you find most useful in your own films?

The most important thing I have recognized in excellent directors is that they have great enthusiasm about all aspects of the project including the performance.

What influence did Edward Bernays' 1925 book, "Propaganda," have on you?

Unfortunately I see the corporately funded and distributed films industry currently as having a hugely propagandizing effect on the U.S. population at large. It is an enormous topic. Bernays was Sigmund Freud's nephew and utilized his uncle's understanding of the subconscious and became the literal founder of the public-relations industry. Bernays came up with the word combination "public relations" to replace the word "propaganda." The book is not an exposé but an instruction manual for the monied and privileged class through psychological "public relations"-propaganda techniques to get the lower-class masses to serve the privileged class with the disguise of democracy. I feel like this book should be mandatory reading for everyone in high school so people in the U.S. would have a better understanding of how things genuinely work in the media.

How do you choose film roles?

Right now I am acting in films so I can fund my own films I am making. That being said if I feel I cannot make a role work in any way I will not do it. ... Usually the way someone is cast has to do with that perception that people have about that actor. This to me is a positive thing and to be able to get into the truth of the psychology of the character is what is important to me. The best philosophy for feeling good about oneself is to not compare one's self to others. Someone could always compare their self to someone who is doing something that they wish they were doing and feel bad about their self. Or conversely someone can always compare their self to someone who is not doing well and then falsely feel great about their self. Either of these ways of thinking is not healthy. If one is accomplishing what one wants to accomplish, that is all that matters. S

James River Film Society presents "An Evening with Crispin Hellion Glover" on Thursday, Dec. 5, at 9:45 p.m. at the Byrd Theatre. Admission is $20, cash only at the door. byrdtheatre.com.