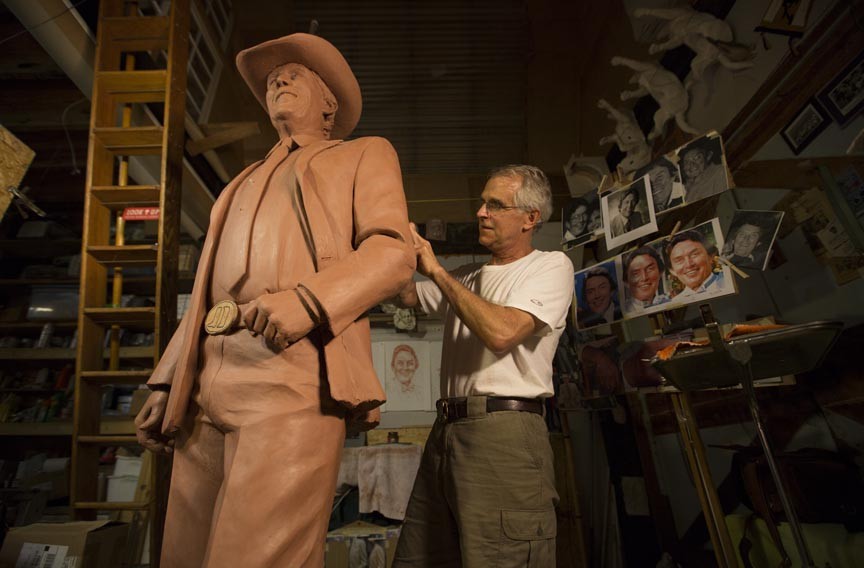 The Richmond artist who created the Virginia Beach sculpture of Neptune, king of the sea, has been commissioned to sculpt another monarch: Jimmy Dean, sausage king.

Richmond sculptor Paul DiPasquale began work on a 7-foot-tall, bronze likeness of the late meat magnate and country music star — cowboy hat, suit, belt buckle, boots and all — earlier this year. It should be completed by October, he says.

DiPasquale is best known for his statue of Arthur Ashe on Monument Avenue, as well as for "Connecticut," the massive fiberglass American Indian peering from above the Lucky Strike building on East Cary Street. The sculptor says Dean's widow, singer and songwriter Donna Meade, approached him in 2011 and asked him to create a standing portrait of Jimmy Dean.

"I accepted because the timing was good and the sculpture was challenging and I knew I could do a good job," DiPasquale says. "But it has to be something I fall in love with or otherwise, it's not worth doing." The more he learned about Dean, a high-school dropout whose gifts as a singer and entertainer were matched by his business savvy, the more he grew to admire him, DiPasquale says. Dean died in 2010 on the Henrico County estate he shared with Meade.

Meade says she wanted to build a Dean museum on the estate, but the project grew too expensive. Instead, the sculpture will be installed in a soon-to-be expanded museum bearing Dean's name at Wayland Baptist University in his hometown of Plainview, Texas. Hillshire Brands, which owns the Jimmy Dean food brands, is paying for the statue "as a tribute to Jimmy," she says.

Meade worked with DiPasquale to capture Dean's likeness and has seen the work-in-progress a few times. "It's scary how close he's gotten," she says. "Every nuance of Jimmy's face, his build, the proportion of his body, the lines of his suit, the jewelry he wore. It's remarkable."

"When she saw it, she cried," DiPasquale says.