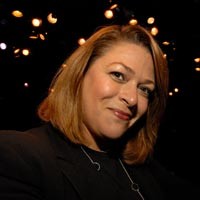 When Jill Bari Steinberg started rehearsing for her one-woman show "The Syringa Tree," she ended each session with a stomachache.

The play is set in apartheid South Africa, and she performed 24 characters throughout, each with a different accent and postures. Physically exhausting and nerve-racking though it was, the show made the rare leap from Theatre IV's experimental Theatre Gym program to the Barksdale Theatre's main stage.

In one scene she's a little girl jumping to get into her nanny's arms, and then dips around to hush the child in the stooped form of the nanny character.

Style theater critic David Timberline gives Steinberg marquee-worthy reviews. Longevity! Daring! Breadth! "A lot of people who are as good as she is leave for bigger markets," he says, adding, "She really can do it all."

In fact, Steinberg doesn't just perform plays, but produces them too, a rare combination in the theater world. She says doing both helps take the edge off some of the competition and makes auditions as much about talent scouting as getting the part.

It's a healthy and holistic attitude proving that although Richmond's theater community is small, it can offer more thanks to its intimacy.