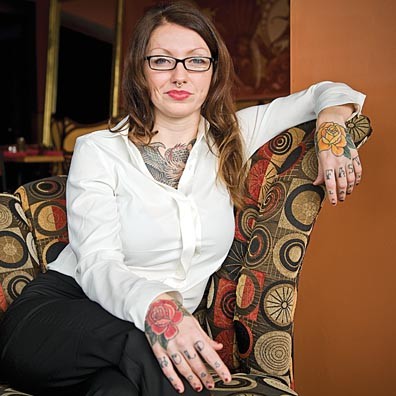 When Jessica Simmons jumped into the body modification industry at the tender age of 14, it was a boys’ club. Years after piercing her first customer, it remains so, she says. “It’s difficult for someone not being a tattooist and not being male,” Simmons says. “You rarely see those people owning their own shops.”

And yet Simmons, owner of River City Tattoo, has built a chain of eight tattoo and piercing studios stretching across what is, for the most part, an ink-friendly region.

A graduate of Virginia Commonwealth University and one-time medical student at the Medical College of Virginia, Simmons is a chief advocate for tattoo and piercing safety. Virginia applies some of the strictest regulations on tattooists and piercing professionals in the country, Simmons says. She would know. She helped write and shape those safety regulations as a representative to the state board that oversees the industry, appointed by former Gov. Tim Kaine in 2007. It’s in that role that her studies of blood-borne pathogens and epidemiology became an asset, she says.

Not everyone in the industry is happy about the added financial burden that comes with increased regulation. “A lot of the industry feels as through the regs are about money, as in getting more of it for the state,” she says. “But as a piercer, what I’m doing essentially is invading the body without a medical license. It is harder on everyone, but safety has to come first.”

If River City Tattoo wasn’t enough, across the street Simmons opened Stronghill Dining Company on the Boulevard in 2008 to diversify her holdings. Simmons also is a frequent lecturer at VCU, educating the next generation of medical professionals about the importance of sterility in the tattoo industry.