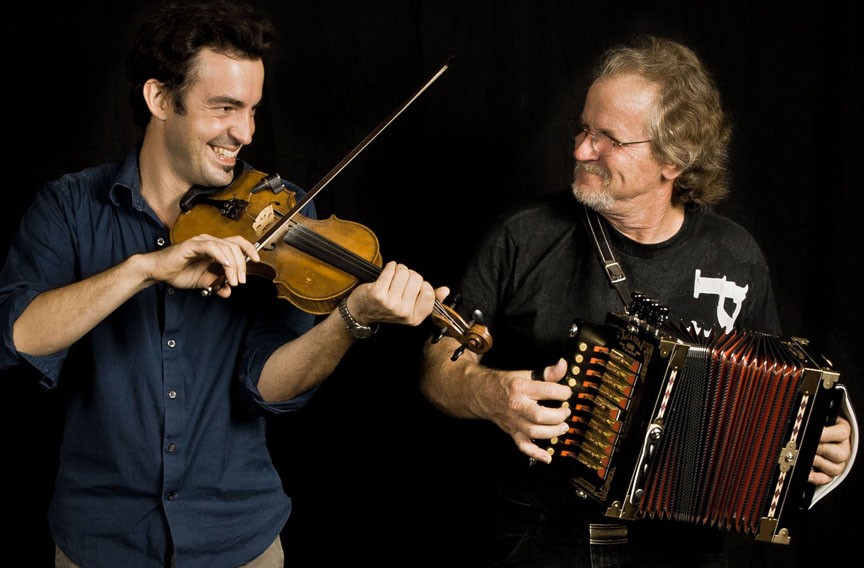 If you want to hear Cajun music by the best, don't miss singer and accordion player Jesse Lége and fiddler Joel Savoy.

"The great Cajun singers have this quality to their voice that pierces your soul — it's like a high, lonesome quality, and Jesse's got it," says Julia Olin, executive director of the National Council for the Traditional Arts.

"They represent a much more stripped, back-porch approach to Cajun which is something we've never had before" festival programming committee member Chris King adds.

In the 1940s and '50s, there was a rural style of Cajun music that showed obvious influences of the country music of that era (for example, Hank Williams Sr.'s "Jambalaya"). Lége and Savoy are rooted in that fun-loving style.

Savoy comes from one of the all-time, most famous Cajun families. He also was a founder of the group Red Stick Ramblers and runs Valcour Records, which is producing a lot of younger groups in Louisiana. He says that popular tunes coming in on the radio continuously infiltrated their culture, and became translated into French for the majority-Francophone population.

"We play what people call 'traditional' Cajun music because that's what we like — the older stuff," he says. "But there is a whole other world of modern Cajun styles."

The good news for those coming to shake a leg Friday night is that the Dominion Dance Pavilion tent is some 40 feet larger this year, according to Talia Moser, who will be teaching the waltz and basic Cajun-style two-step before the band plays.

Moser, who since 2005 has produced and been host of the WRIR radio show "Louisiana Dancehall," says the dance steps will be easy to pick up. "Down [in Southwest Louisiana], people are not accustomed to sitting and watching," Moser says.

Savoy echoes the sentiment. "To me, that's what authentic folk music is: music by the people, for the people," he says. "We're not a bunch of pros putting on a 'show' for an audience. We're regular folk who like to cut up and drink and socialize as much as anyone, and it just so happens we make a living doing so!"