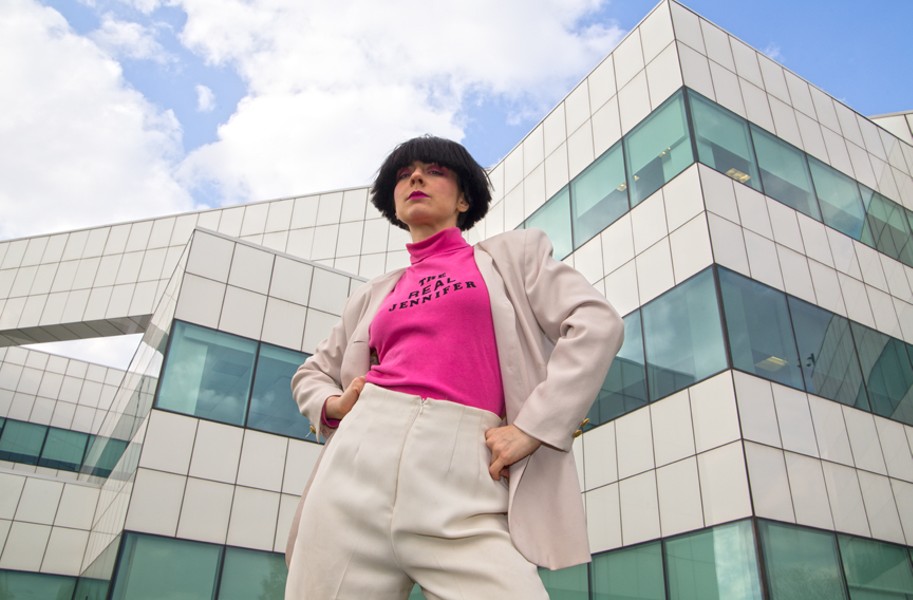 In January of 2017, Becca Kauffman, then a seven-year veteran of indie band Ava Luna, received a voicemail from an unknown number, informing her she'd won a lottery.

Several months previously, Kauffman had sent only proof of residence and the name "The Jennifer Vanilla Hour" to Queens Public Television to enter a random drawing allocating public access airtime. The message informed Kauffman that her show — little more than a title and loose concept at the time of the application — would be airing for an hour twice a month.

"I submitted so early on, really before Jennifer Vanilla truly existed. It was kind of aspirational," Kauffman says . "By the time [I received notification] a handful of months had gone by and it really was something — or starting to be something."

Tight and rhythmic, yet elusive and enigmatic, the live set is built from hooky, house-flavored beats, equal parts dance club and performance art gallery show. At center stage, a naive, entrepreneurial quasi-human named Jennifer Vanilla jolts, twirls, prances and stomps, goading you to join her ambiguous revelry. You may want to lose yourself in the hypnotic rhythms, because if you try to figure out what on earth is going on with the show's comically self-absorbed protagonist, you might not find an answer.

Whether you experience her as a narcissistic house DJ or a vacuous salesperson, one thing is clear: Vanilla is trying to move you. But there is something aggressively vacant about the sales pitch. Her new-age sprightliness suggests that she has the answer you need, but the product is the gesture itself, with only the slightest hint at content.

At Jenniferland, separateness is secondary; togetherness is the prime condition.
At Jennifer Land, you'll be where and who you want to be, from the moment you arrive! You'll enjoy guided exercises like walk therapy, infinity exploration, braiding! At Jennifer Gym we offer curves! Figure eights with your hips, dancing, icing on cake…Cake!
If you're gonna have a fantasy, at least make it reality.
If you're gonna have reality, at least make it a fantasy."
— Jenniferland (Audio brochure)

Reflecting on her first career, Kauffman recalls her audition for Ava Luna in 2009. Though she was passionate about the music and eager to join, she warned the band that her own career "would always come first." She laughs and admits, "Soon after I threw that towel in and Ava Luna became my full life creatively for about six years."

Kauffman acknowledges that personal insecurities, as well as the scheduling and creative demands of her critically-acclaimed indie band, all contributed to her solo art sitting on the back burner for years. "Ava Luna gave me purpose and direction. I logged hundreds of hours of stage time and stayed musical. … But I don't consider myself a musician," she says. Despite her training in jazz voice, Kauffman sees herself as a theatrical performance artist.

In an interview, Kauffman tried multiple times to convince me that Jennifer Vanilla is not about music. "It's an emotional experience. … At the end of a show I want to know that I got to another place and that I took people with me."

Though the concept and persona provide the delicious cognitive dissonance, the truth is the musical choices are a significant part of what makes this project fascinating. Vanilla's particular mix of pop-music rhythm, workout-video desperation and entrepreneurial zeal places an imaginative critique of egocentric commercialism dead-center on a sweaty dance floor.

There are allusions to seduction and sexuality, but make no mistake: This rubbery disco diva is not here to titillate you. Kauffman explains that Vanilla "has no genitalia," and is styled with a "shoulder-padded blazer to be all business." She continues: "Jennifer Vanilla is a foreigner. She's from the exotic land of Jenniferia on Planet Jennifer. She's not an earthling, but she's no stranger to Earth. She's been here for ages, studying and absorbing humanity, and has gone through many cycles. … In that way, you could say she's like a vampire — only a Jennifer."

Fittingly, in "Technosexual," Kauffman inverts the titular expectations, crafting her most psychedelic, grooveless composition. "What does it mean, you ask: Technosexual?" No clear answer is provided. Employing pitch-shifted spoken vocals and detuned synthesizer detritus, the short piece is simultaneously comical and foreboding, alluding to cheesy sci-fi soundtracks that employ goofy synthesizers as extra-terrestrial signifiers.

Perhaps the most refreshing part of this project is that it simultaneously lampoons self-help culture, while aiming to provide emotional and artistic reassurance.

"[Jennifer Vanilla] is birthed from the loneliness of being an artist. I find art-making terrifying, and I've done whatever I can to avoid it for my entire life, even though I do it in spite of myself. It makes me miserable, but I'm compelled," Kauffman explains. "Part of Jennifer's undying self-confidence is an antidote, a way to talk to someone who feels a sense of shame in exercising their ego, even in healthy ways. I think some people have guilt complexes in terms of art-making, feeling that it's a little indulgent. … I'm an only child and a turkey-baster baby. I identify with little orphan Annie and have since I was really young; there's this self-isolating nature that I have. Jennifer Vanilla is a way for me to teach myself, and maybe other people, how to connect, to work on that and practice that publicly, almost by playing the fool." S