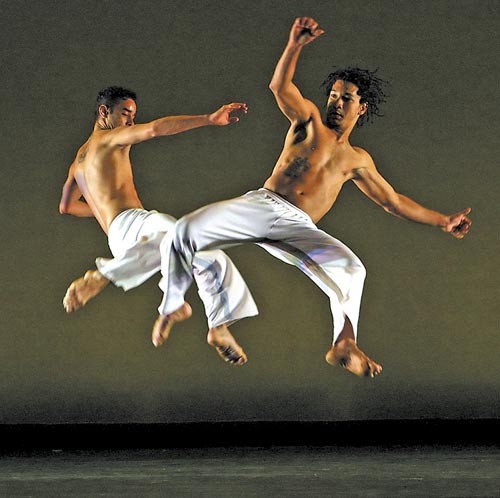 Capoeira is music as combat, dance as martial arts.

Created by slaves in the heavily African Brazilian state Bahia, it's a series of warrior moves — kicks, flips and lunges — disguised by music. The sonic ruse let the form be practiced openly in front of the slaves' Portuguese colonial masters.

According to leader mestre Jelon Vierira, no other art form has done as much to promote the Portuguese language.  “But if you ask 10 people to describe capoeira,” Vierira says, “you will get 10 different answers.”

Vierira has devoted a lifetime to the form, a pursuit that requires not only intense physical conditioning but also musical facility. The result can be a spectacular display of physical discipline. “We bring all kind of excitement, flips, dance and lethal kicks without making contact,” he says. “We bring the beauty to people. … Life is all about love, respect, responsibility.”

They also bring the music. “You can't escape it,” Vierira says. “It is part of the process. You are not just a dancer but a player … you can't advance unless you learn to play certain instruments. You have to become poet because you have to write your own songs.”

Although he's at the highest level of his art — mestre is a title, literally master — Vierira sees still sees himself as part student. “In 2013 I will be celebrating 50 years of capoeira,” he says. “But even when I am teaching I am still learning.” He promises an exciting performance at the festival as he and his troupe segue between nonstop feats of martial athleticism and the creation of rhythmic accompaniment. Come for the spectacle, stay for the philosophy.