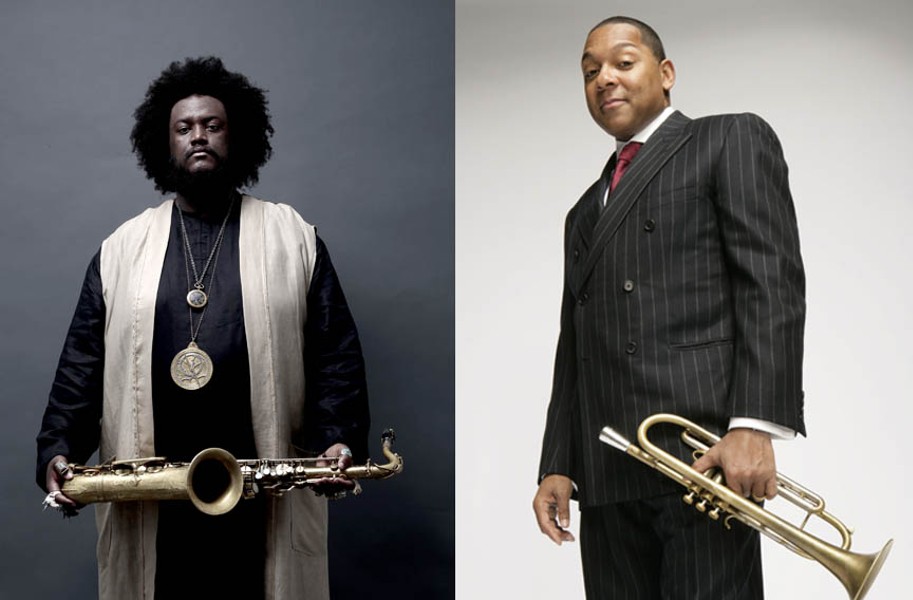 Kamasi Washington is a tenor saxophonist, composer and producer. Wynton Marsalis is a trumpeter, composer and artistic director of Jazz at Lincoln Center.

Superficially, the two artists could not be more different. Marsalis is a still youngish elder of "America's classical music." Born in New Orleans, the birthplace of jazz, his brash, often divisive brilliance is the cornerstone of the Lincoln Center Jazz Orchestra in New York, the metropolis where jazz became an institution.

Washington, whose quiet spirituality has been compared to John Coltrane, gained early notice backing Snoop Dog, whose gangster rap-genre Marsalis once famously condemned as "ghetto minstrelsy." Washington's breakout came with Kendrick Lamar's hip-hop masterpiece "To Pimp a Butterfly." He solidified his reputation with "The Epic," a three-CD excursion sprawling across the universe of black music.

But while the suit-wearing establishment musical giant and the massive, dashiki-clad relative newcomer may seem to be worlds apart, they have much in common. Both come from families of musicians, both have been lauded as generational jazz torchbearers and both bring programs focused on the unifying power of music.

For Marsalis, it is the Christmas songbook. "I feel like that is the season where the music is not segregated by generations," the trumpeter says. "New tunes, old tunes, they all carry a meaning that transcends." He recorded his first holiday album, "Crescent City Christmas Card" (CBS, 1989), when he was a 20-something young lion, rehearsing at his house and working out his first voicings for multiple horns. His third and most recent, "Big Band Holidays" (Blue Engine, 2015), features the orchestra and singers, including former Richmonder Rene Marie. Christmas songs provide easy access for jazz appreciation, the familiar harmonic bones visible through the body of melodic improvisation.

Kamasi Washington's tour supports his new EP from this year, "Harmony" (Young Turks). It wasn't conceived as an album, but as the soundtrack to a multimedia set of paintings and film at New York's Whitney Museum of American Art biennial art exhibit. Nevertheless, it works beautifully as a standalone composition. "It's meant to be a celebration of diversity," Washington says. "I am using counterpoint as a metaphor for the beauty of how different people, from different walks of life, all come together."

Both Marsalis and Washington were born into jazz families. Ellis Marsalis, a well-known pianist and educator who served as the Virginia Commonwealth University coordinator of jazz studies in the mid-to-late '80s, instilled his disciplined work ethic into a nearly complete hard-bop ensemble of offspring, including drummer Jason and trombonist Delfeayo, in addition to saxophonist Branford and trumpeter Wynton. "I came out without any illusions about being a star," Marsalis says. "I have respect for what he did, what he and my mother taught us. I try to live by that. And I don't take what I have, or the great musicians I get to play with, for granted."

Washington's saxophonist father, Rickey, gave up a promising performance career to be a presence in his son's life, working as a music teacher in Inglewood, California.

"He wanted to get me into jazz.," Washington says. "I liked it but wasn't totally into it until my cousin brought over a record. Sometimes it is hard to receive from your parents." The record was one by an early '60s recording of Art Blakey's Jazz Messengers featuring Wayne Shorter. In another touch point for both musicians, Marsalis, along with older brother Branford, played in the early 1980s lineup of that long-running group.

Marsalis's career exploded in his late teens. His phenomenal technique — which earned Grammys for jazz and classical records in the same year, twice — and sharp tongue made him the eminently quotable young savior of jazz. Washington's rise has been more of a slow burn, playing with a close-knit crew of high school friends, mostly second-generation musicians, who called themselves the West Coast Get Down. Inspired by "The Golden Age of Apocalypse," the debut of bassist Stephen "Thundercat" Bruner, they took time off in late 2011 for the month-long recording session that resulted in "The Epic" and several other albums.

Washington's hip-hop cred and open-hearted, song-based sound made him a crossover success, as in context at the indie-rock Coachella as his 2015 appearance the Richmond Jazz Festival. Hence his booking at a youth-oriented venue, the National, rather than the corporately-rebranded Altria Theater. But, regardless of location, it is ultimately about the joyous blessing of talented sonic expression.

"When you look around the world," Marsalis says, "you see how much is a manifestation of human creativity. People work hard. Every building, every brick, every flower that's potted, every book that's put up, people did those things. It requires industry, intelligence and execution. For all the complaining that goes on, a lot gets done."

While the terminology is useful, hard divisions between genres are increasingly an illusion. "The name [jazz] is just a name," Washington says. "The music exists beyond that. For me, the music is more important than the title. I understand the idea of maintaining a tradition, but it is people, not the name that dictates the heritage. I play the music in my heart, and I am not going to change it to fit a word. Is it jazz? Who cares?"

But which performance should you attend?

"I had a math tutor in high school," Marsalis says. "He used to say do you want the answer to the question, or do you want to know how to do the math?"

They are on separate nights. Do the math. S