Personality conflicts and naming rights: the real story behind Jay Ipson’s forced retirement as director of the Holocaust Museum. 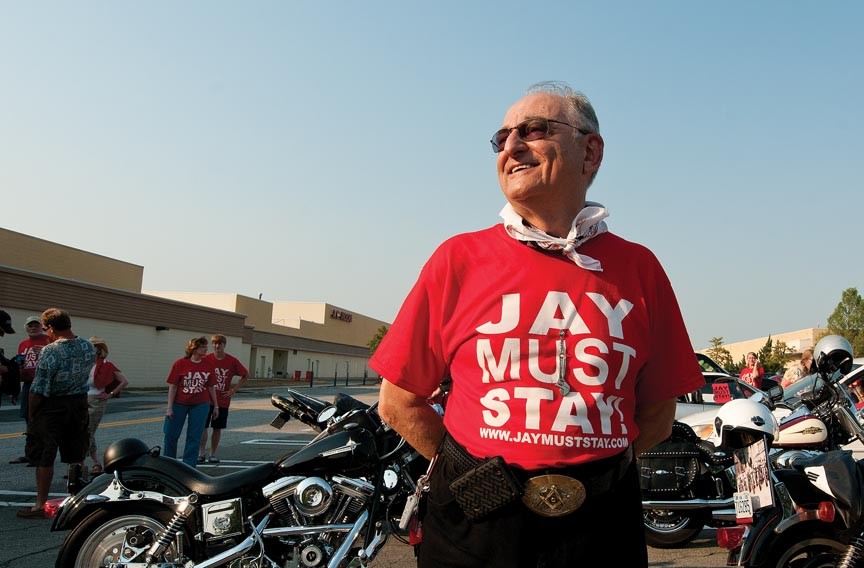 New details about the dismissal of Jay M. Ipson, co-founder and executive director of the Holocaust Museum of Virginia, are coming out as a group of board members try to restore him as director emeritus.

The real reason for the director's ousting? Long-running friction between Ipson, who helped build the museum from scratch, and Marcus M. Weinstein, the museum's biggest donor, say some former museum staffers and board members.

In May, when Style Weekly broke the news of Ipson's removal, Weinstein said, "that's a personnel situation, so I don't get involved." Weinstein did not return calls left by Style last week.

Other board members are staying quiet. "I'll tell you, it's not an easy topic, and I'd rather not talk about it," says Simone Schwarz, a board member who is also a Holocaust survivor.

Weinstein is a real-estate magnate, chairman of the museum's board and one of the richest men in Richmond. He founded Weinstein Properties in 1962; today the family-owned company owns or manages more than 13,000 buildings, according to its website. Weinstein and his family have given several million dollars to the Holocaust Museum over the years (the museum doesn't disclose the exact amount).

Ipson, 77, is a genial, cowboy-hat-wearing former auto-parts store owner and a Holocaust survivor. In 1943, his family was deported to the Lithuanian Kovno ghetto. They later escaped, hiding in a cramped underground dugout on a farm for nearly a year.

Ipson's family photographs and memorabilia formed the core of the first Holocaust Museum exhibits, which Ipson and his cofounders, Mark Fetter and Al Rosenbaum, established in 1997 in a few spare rooms in Temple Beth-El in the Museum District. In 2000, the General Assembly donated a Shockoe Bottom tobacco warehouse to the museum. The new space was dedicated in April 2003.

Ipson and museum co-founder Rosenbaum had always been adamant that the museum "belongs to everybody," says board member Brett Zwerdling, who last week broke the board's silence on why Ipson was dismissed. For that reason, Ipson opposed the practice of giving naming rights to prominent donors, Zwerdling adds.

About two years ago, Weinstein proposed honoring his mother, Minnie Roth Weinstein, on the arch above the door to the museum's synagogue, which he had helped fund. Ipson objected, as he wanted the synagogue exterior to resemble one in Europe. But Weinstein prevailed, and since then has refused to speak to Ipson, Zwerdling says.

"Everything for Mr. Weinstein is about the golden rule: He who has the gold, rules," Ipson says.

After the incident with the arch, Weinstein "systematically started trying to take over the museum and run things," Zwerdling says.

It all came to a head at a board meeting Feb. 24, 2011. There was a surprise item on the agenda, Zwerdling says: a vote on whether to remove Ipson as the museum's director and grant him emeritus status. "They snuck it in," he says, "and a lot of the board members didn't even know that it was going to be made."

Twenty-three of the 30-odd board members were there. No effort was made to inform absent members what was going on, Zwerdling says, or to allow remote voting via polling service. His motion to continue the matter to another meeting failed.

"They said, 'Jay, you're kind of getting a little old to do this,'" says Ronny Ipson, Jay Ipson's son and a museum board member who was present that day. Ronny Ipson says he retorted to Weinstein, "Well, how old are you?" (Weinstein is in his 80s.)

The senior Ipson told his son to stay out of it, Ronny Ipson says, so he kept quiet. Jay Ipson had thought he would be able to retain his office and a presence at the museum, he says, "so my dad kind of just accepted it."

That changed in the spring, when a minor brouhaha erupted over a piece Ipson wrote for the March issue of the museum's newsletter about Holocaust survivors' struggles to get financial restitution. On April 6 Ipson wrote an apology letter to museum supporters, including board member Ambassador Randolph Bell, former special envoy for Holocaust Issues for the U.S. State Department. In the letter, Ipson said he feared he had "created the erroneous impression that [Bell] was responsible" for the adverse treatment of the survivors' claims.

After this incident, Ipson was told he could no longer maintain his office at the museum, and he would have to remove his things — 12 years worth of awards, papers and memorabilia — by June 30. At this news, Ipson says, "I got a little bit upset." On July 1, Simon Sibelman, the museum's assistant director and a Holocaust scholar and educator, took over as executive director.

After Ipson's supporters voiced their outrage — notably on a Facebook page called "Jay Must Stay" — the board granted Ipson a temporary reprieve on removing his possessions. Zwerdling has called a special board meeting for 5:30 p.m. July 9, during which members will vote on his motion to reinstate Ipson's permanent office and officially grant him status as director emeritus. Weinstein has also scheduled a regular board meeting on July 26.

Ipson says he's happy to step down as head of the museum as long as he's allowed to have some role, particularly speaking with schoolchildren about the Holocaust. "If somebody else wants to run the place, that's fine. It's one headache less for me."

Ipson wasn't the only museum employee who lost his job. Several have been dismissed in the last two years, including one volunteer in his 70s who had worked without pay at the museum since it opened.

Ipson's presence remains strong in the museum he founded. The Ipson name is on photographs, artifact labels and the family Torah panel that hangs in the synagogue. A life-size cardboard cutout of Ipson in his cowboy hat stands in the lobby, outside the gift shop that sells "Izzy's Fire," a book about Ipson's family's survival in the Holocaust.

The stress has taken its toll. Ipson hasn't had a good night's sleep in two years, Zwerdling says.

"It's not even the Holocaust that's keeping him up at night," he says. S

Contributing editor Greg Weatherford assisted with reporting for this article.