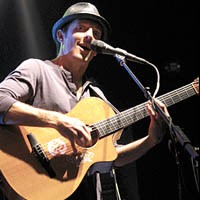 Billed as an acoustic gig, the second night of Jason Mraz's sold-out stint at The National Nov. 28 found the Mechanicsville native stripped down to strings and pitch-perfect pop musings.

However, fans expecting to find the crooner solo atop a bar stool might have been slightly surprised to see Mraz's full band backing him, sans the horn section from the night before. Though unplugged, it was hardly what one thinks about as an acoustic show. The crowd didn't care when the lights dropped, though, and what appeared to be ads featuring Mraz began rolling, prompting an eruption of squeals and flashbulbs.

"Tonight, Not Again" kicked off the set with a barefooted Mraz strumming and swaying to the grooves of his early repertoire before moving into the head-bopping radio gem "The Remedy," which featured a brief cover of Oasis' "Wonderwall." The set list left rabid fans, some who had made a 12-hour drive, drooling with live rarities like "Dreamlife of Rand McNally" and rounded out with the reggae-based rhythms of Mraz's current smash "I'm Yours." Mraz threw in a smidge of Bob Marley's "3 Little Birds" and asked the crowd to participate in the chorus by making their favorite barnyard animal noises. If this all sounds a little absurd, you should have seen the sea of fans, everyone from frat boys to grandmas, mooing and clucking.

It goes without saying that one key element of Mraz shows is levity. If the guy ever fails musically (unlikely), there's a television show waiting in the wings. From the audible farm fest to a shout-out to Frosty the Snowman during a timely "Winter Wonderland," Mraz demonstrates a quick wit that is often well above the heads of his audience, and highly entertaining.

The five-song encore brought more of what we were expecting where acoustic is concerned. Longtime percussionist Toca Rivera accompanied Mraz on the hit "You and I Both," finally giving his buttered vocals a well-deserved showcase. Opener Lisa Hannigan (of Damien Rice duet fame) filled the shoes of Colbie Caillat duetting on "Lucky," making for one of the night's melodic high points. Mraz closed out the show with a solo rendition of "The Boy's Gone," finally fulfilling the promise to strip down to his musical skivvies. Despite the now-fully-drunken crowd that whooped and hollered through the last hushed tune, the result was nothing less than perfection. What can we say, Virginia knows how to raise ƒ?~em.