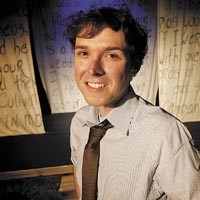 There are artists who other artists line up to work with; they draw together cohorts of followers fervent in their praise and loyalty. In his two-year tenure as a director in Richmond, the outgoing and energetic Jase Smith has become one of those artists.

“People think there isn't a market for people to see offbeat shows,” Smith says. “I think there are lots of underserved theatergoers who haven't been getting a chance to see what they want to see.”

When not directing, the young auteur has lent his marketing prowess to projects initiated by the Conciliation Project, a group led by a Virginia Commonwealth University theater professor that produces theatrical works on issues of social justice, race relations and discrimination, and then uses those projects to assist nonprofits such as a local women's shelter and the Daily Planet.

Sensing the benefit in keeping a guy like Smith around, the Firehouse offered him a job and a guarantee of two shows to direct a season to forestall the director's planned emigration to New York. Want proof he's committed to pushing the local envelope? His next show: “A Very Merry Unauthorized Children's Scientology Pageant.”