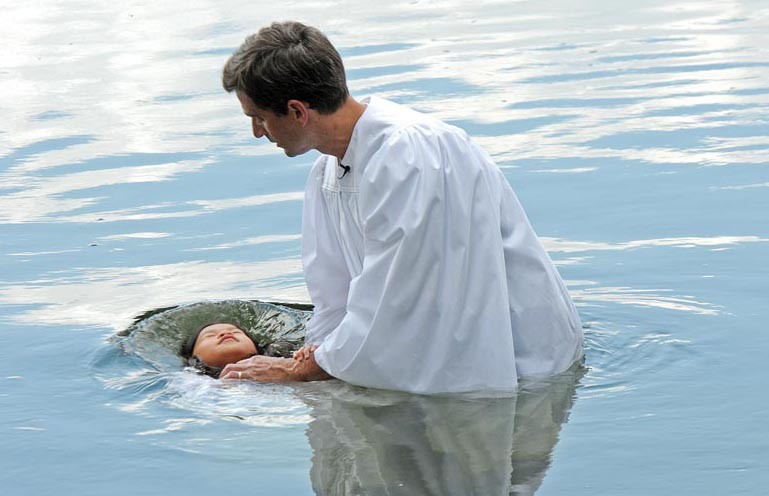 It could be a scene from a century ago — except for the bright kayaks gliding in the current and the high-powered sound system that amplifies every splash.

“Welcome to our third annual baptism here on the James,” the Rev. Jim Somerville says. A shirtless fisherman drifts past, looking curiously at the assembly. The river is gentle today, running low, slow and clear.

Somerville revived the tradition of James River baptisms three years ago, when he became the senior pastor of First Baptist Church at Monument Avenue and the Boulevard. Founded in 1780, First Baptist was among the first churches in Richmond.

River baptisms have long been part of the church’s 231-year history, says Joyce Chrisman, Somerville’s administrative assistant. On one occasion, according to church lore, a member was swept away in the current. A rider on horseback had to be dispatched to retrieve him. “Talk about being moved by the spirit,” she says.

Somerville, 52, has the boyish looks of Steve Carell and the honeyed voice of Garrison Keillor. He was baptized in a river in West Virginia when he was 14. “It was an unforgettable experience,” Somerville says.

There are a few reasons why a James River baptism is special, the pastor says. One, it’s a community event. As each participant emerges, dripping, from the water, “the only place to go is into the waiting arms of the congregation,” he says, and they’re “just beaming their love and encouragement toward you.”

Also, Somerville says, the ritual is “as close to the beginnings of Christianity as we can come.” Each candidate professes his or her faith with the simple words, “Jesus is Lord”: the same words, he says, spoken by the earliest Christians.

McGee was baptized in 1976, she says, but since then she has grown in her faith and wants to declare her recommitment. She’s a member of a First Baptist “microchurch” — a small group of worshippers who watch Somerville’s sermons on television each Sunday on WRIC-Channel 8.

Like McGee, some of the white-robed candidates are older members who have already been baptized but want to renew their faith. Others are doing this for the first time.

After a few remarks the pastor wades into the river, and the baptism begins. The first is new father James Brooks, who dedicated his infant son to the church that morning. It is a simple ceremony. A Bible verse is read aloud, and Brooks professes his faith. Somerville speaks a few words. And then, in a practiced motion, Somerville places Brooks’ hand upon his left arm, keeps his right hand on Brooks’ back, and dips him backward into the water. The crowd watches quietly.

Eleven more times the ritual repeats. There is Don Price, 64, a former broadcaster for Richmond’s WXGI radio station. “Jesus is Lord,” he says in his rolling radio voice. There is 12-year-old Darius Lacy, whose shy smile grows into a grin as he emerges from the river, and 10-year-old Liam Murray, who holds his nose as he goes under.

And then there is the youngest, 8-year-old Leah Mei Ward. The water, waist-deep on the adults, comes up nearly to her shoulders. Her face is grave, but not afraid.

Leah says she has known since she was 7 that she wanted to be baptized: “I just told my mom I wanted to go down to the pastor.”

After meeting with Leah and her parents, Somerville says, “I became more and more convinced that this is a little girl who loves Jesus.”

“Jesus is Lord,” Leah says in a tiny voice. With a small splash, her face disappears into the green river.