“The inaugural ceremony was the climax of a whole week of inaugural activities,” James Gilmore says. “As a candidate I'd tried to bring a lot of people together who would not have necessarily voted for a conservative Republican. ‘A Time for All Virginians' was my campaign slogan and for me the inauguration was designed to bring that concept to life. We did a ball in Abington and a reception at George Mason's Gunston Hall and an event at the Raleigh Tavern in Williamsburg. We were also the first to do an event at St. John's Church on Church Hill.”

“At the inaugural at the Capitol we had built a ramp for Lt. Gov. John Hager who is in a wheelchair,” Gilmore says. And in a gesture of solidarity, “We [the official inaugural party] all walked up that ramp to take our seats on the dais.” 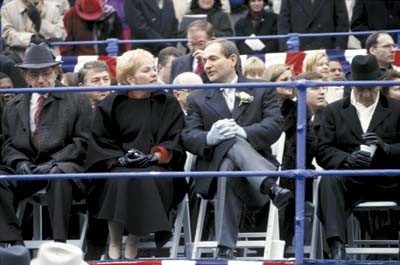 James and Roxane Gilmore await his swearing-in at the Capitol Jan. 17, 1998.

The band from Tucker High School in Henrico County, from which Gilmore had graduated in 1967, performed in the parade, he says: “That was special for them and special for me.”

“But inaugurations are highly directed, you feel very constrained,” he says. “You're in a bubble, it's like you're playing a part in a play.”

“As Roxane [his wife] and I were walking down that street to the mansion after the parade, a friend of mine, Bob Ellis, with whom I'd served in Europe, had come from Ohio. I had all this security around me and I waved but I didn't even go over to speak to him,” he says remorsefully (Some months later, however, the Gilmores invited Ellis and his wife to the mansion).

At the inaugural ball, held that evening at the Richmond Marriott, Jim Belushi and his band performed with the new governor joining in. “Both my mother and father were there and enjoyed the whole thing,” Gilmore says. “It was the only time I ever saw him in a tuxedo: My father had been a meat cutter for Safeway and my mother was a Methodist church secretary. I look back on that with great fondness.”