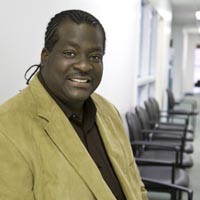 When a young James “J.J.” Minor III crawled off his mother's knee, it was smack into the middle of the swirling excitement of Richmond's thriving black political community of the 1970s and ƒ?~80s.

At 8 years old, Minor thought it was all just part of normal childhood — passing out fliers for candidates at events and rallies and long chats with Richmond political legends such as L. Douglas Wilder and Henry Marsh. One day he saw Marsh on television, he says: “It caught my eyes.”

Minor now understands the rarified air he breathed deeply as the son of community activist and current City Councilwoman Dolores McQuinn. He's stepping up with an eye to continue her legacy as a community-focused public servant. His day job is as an employment specialist with Richmond Community Action Program, but he's also vice president of the Richmond Crusade for Voters, the Richmond Democratic Committee and a campaign chairman for his mom.

“I guess it's seeing my mom involved in politics and seeing how she has made a difference in the lives of other people,” Minor says of his own ambitions. “To me she's not a politician, she's a public servant. I have an obligation to help people.”