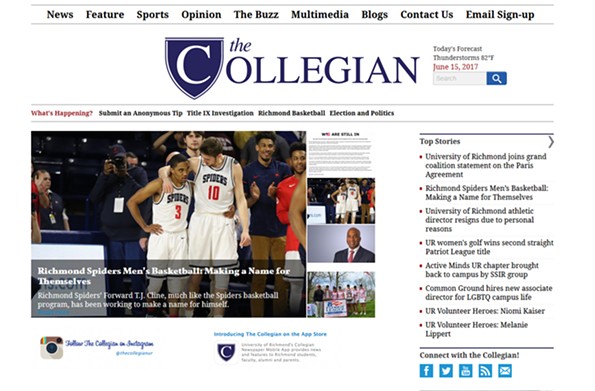 One newsmaker begets another.

Former FBI director James Comey's daughter, Claire Comey, was chosen as editor-in-chief of University of Richmond's student newspaper in March and will continue her tenure when she returns for her senior year this fall.

Ms. Comey has written on a number of the topics for the Collegian, including "Five Things Richmond Students Should Know About the Presidential Election" and stresses the importance of being informed.

If you’re going to wear that “Make America Great Again” hat, you need to understand the policies Donald Trump is supporting. And if you’re going to shout “Hill Yes I’m With Her” from the rooftops, you need to back that up with the issues you care about that Hillary Clinton also advocates. It is easy to focus on Trump’s sexist comments and general bigotry, or Hillary’s lies and emails, but do you know their stances on our current fiscal situation, women’s issues, social justice issues or foreign affairs?

Appointed by President Barack Obama in 2013, James Comey was involved in campaign investigations into Hillary Clinton's email, which some think tipped the election in Trump's favor. Most recently, he was fired by Trump after leading the investigation into Russian meddling in the election and testified to the U.S. Senate about Trump's alleged interference in the investigation.

Ms. Comey lauds the value of the free press and the Collegian's role on campus in a letter to the readers. But she notes the struggle of running a publication in today's political climate.


At the same time, I am taking over as editor-in-chief when our nation’s trust in the news media is at an all-time low. As the toxic rhetoric surrounding the news media in a democratic society seeps into the cracks and corners of our nation, it further weakens another pillar of open and free society.

James Comey and his family lived in Richmond from 1993 until 2001. Mr. Comey worked at McGuireWoods law firm, taught at the University of Richmond law school and then served as a federal prosecutor for the Richmond division of the U.S. Attorney’s Office. He helped develop the controversial crime program, Project Exile.

Claire Comey is one of five Comey children and was born in Richmond. She also serves on an advisory committee for sexual assault response and prevention on campus.

Ms. Comey did not return an email request for an interview.