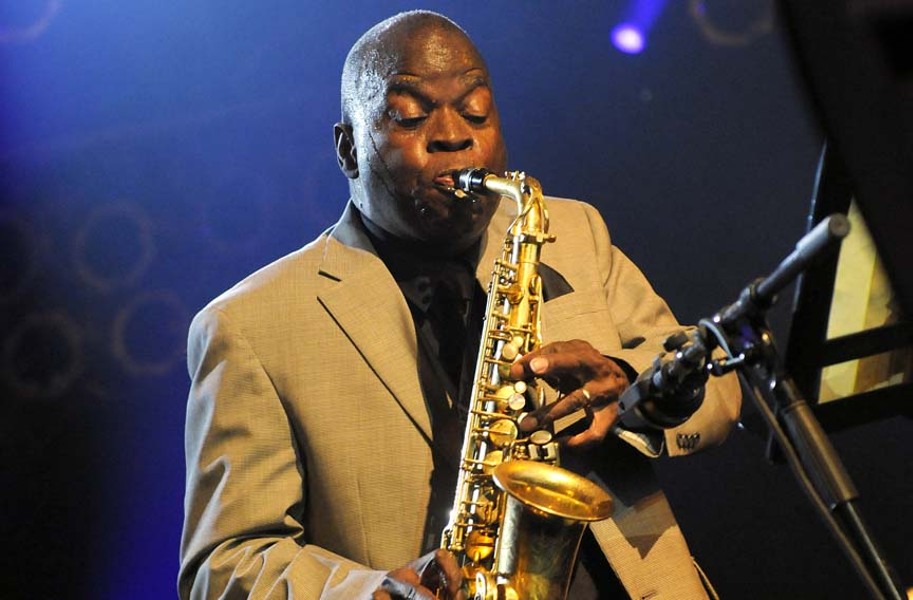 When the Godfather of Soul asked if young Maceo Parker played baritone sax, Parker answered in the affirmative … even if that wasn’t strictly true.

“I answered it like, ‘Uhhhh … yes sir,’ with a little smirk on,” Parker recalls. And then Brown asked, “Do you own a baritone sax?”

“My smirk got a bit larger,” says Parker, who in 1964 was a gifted young tenor sax player and college student when he asked to join Brown’s band after the singer hired Parker’s younger brother, Melvin, as a drummer.

Maceo Parker had been playing tenor saxophone in touring bands since high school, performing to packed segregated nightclubs in his native North Carolina and Virginia, but he had minimal experience with baritone.

Brown said, “Tell you what: If you can get a baritone sax, then you can have a job too.” They shook hands and with that, Parker became a featured soloist and popular member of Brown’s band off and on from 1964 to 1988.

That handshake — and Parker’s talent — took him from small-town Kinston, North Carolina, to a career touring the world, playing with James Brown, Prince, Ray Charles, George Clinton and Parliament-Funkadelic and as an acclaimed solo artist.

Parker also had a blink-and-you’ll-miss-it cameo in the 1985 blockbuster film, “Rocky IV,” performing in a powder-blue tux during Brown’s flamboyant musical number “Living in America.”

“I [had] a little bit more hair there,” says Parker, 73 and nearly bald, with a self-deprecating laugh.

Most recently, in August and September, Parker fronted the Ray Charles Orchestra and the Raelettes, reunited for the first time since the R&B legend’s 2004 death, in concerts at the Hollywood Bowl and the Monterey Jazz Festival.

“I was blessed. My natural [singing] voice is very close to his,” Parker says about performing the songs of his boyhood idol, with whom he toured as Charles’ opening act in 2003. “I was just in awe, man,” he says of that experience.

As a member of Brown’s band, Parker played many roles, ranging from performing sax solos to singing backup to draping the iconic cape over Brown’s shoulders to emceeing — a duty he performed the night of Martin Luther King’s assassination.

He also recalls playing on demos of such songs as “Papa’s Got a Brand New Bag,” which Brown recorded at local radio stations so he wouldn’t forget new tunes he was writing while on the road. Brown was known for calling out, “Maceo, I want you to blow!” to the sax player during shows.

Parker toured with Prince in 2007 and 2011, bonding with the late rock star, who died from an accidental drug overdose earlier this year.

“I really, really loved that guy. He was a sweetheart and I feel really lucky to have worked with him,” Parker says. “I always called him a sweetheart and a genius and he always called me ‘the Teacher.’ He said, ‘Coming to the stage — the Teacher!’ … It got to a point where anytime I played Minneapolis and he was at home he would always come and bring his band every time.”

While Parker’s not a household name, his fans are international — and influential. In France, where he received a lifetime achievement award at the 2012 Les Victoires Du Jazz awards ceremony, he’s likely to get asked for an autograph or selfies by immigration officers stamping his passport.

And Prince’s band was dumbstruck backstage at a show in Las Vegas when an aloof Michael Jackson approached and praised Parker, the first and only time the two men met. Other acts he’s played with include the Dave Matthews Band, the Red Hot Chili Peppers, De La Soul, Bryan Ferry and James Taylor.

“I didn’t make no money [but] I’ve had a lot of fun, been a lot of places, met a lot of people and all of that,” Parker says of his career. And amid turbulent times, there’s only one message he and his band want to leave with their audience: “Love, love, love — it’s all about love and always remember we love you.”