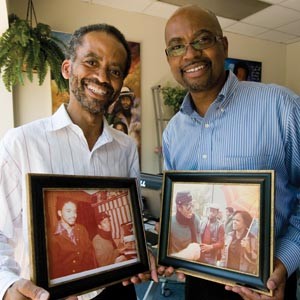 A photograph of a young Michael Jackson on tour in Richmond, published in Style Weekly following Jackson's death last year, has caught the attention of a local man who says he shot the photo.

The July 1, 2009, edition of Style published an image of Jackson that former Virginia Museum of Fine Arts librarian Betty Stacy said she'd purchased at a flea market outside the Richmond Coliseum around 1980. At the time of publication, the date of the photograph and the name of the photographer were unknown.

Richmonder Hugh Jones, executive director of the Salvation Army Boys and Girls Club, says he shot the photograph the day after the Jacksons performed at the Richmond Coliseum in 1979.

Jones, 49, and his brother, Jerome W. Jones Jr., 50, a local artist, say they'd tried unsuccessfully to attend the concert at the Coliseum. But the next day they were driving down West Franklin Street with their mother, Wilnette Jones, when they saw Joe Jackson standing on the sidewalk in front of what was then a Holiday Inn at 301 W. Franklin Street, now a Doubletree Hotel.

The Jones brothers say their mother parked the car and introduced herself to Joe Jackson, saying she'd like him to meet her sons. Then the Jackson brothers joined the Jones family on the sidewalk before boarding a waiting tour bus.

Joe Jackson subsequently invited the Jones brothers aboard the tour bus, where they mingled and took more pictures. One shows Michael Jackson holding up a portfolio of Jerome Jones' artwork. Michael Jackson “took the time and looked through all of it,” Jerome says.

The Jones brothers have other photographs of stars posing with their portraits that Jerome had painted, including Stevie Wonder, Elton John, Smokey Robinson, B.B. King, Jayne Kennedy and Steve Harvey.

The kicker of the visit, as the Jones brothers recall it: After looking through the portfolio, Michael Jackson said, “People need to see this.”