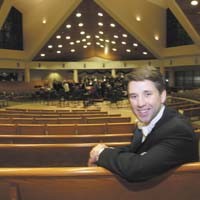 The operatic tenor is usually seen and heard through a Mediterranean lens: a Luciano Pavarotti or Roberto Alagna, reaching for the high notes and reveling in the high passions of Verdi and Puccini, and behaving as if real life were an extension of the oversized, overwrought drama of the opera house.

William Ferguson doesn't fit that picture. The Richmond-born tenor, returning home this weekend to join the Richmond Symphony in Bach's “St. Matthew Passion,” is a more life-sized figure. A trim 31-year-old who blends in with the Sunday brunch clientele at a Carytown eatery — he may have gone to school with some of them at St. Christopher's in the 1990s — Ferguson saves his showmanship for the stage.

And he's singing on many stages. Last summer he divided his time between performances of JanA­cek and Schubert at the Marlboro Music Festival and singing in the road show of Eric Idle's gospel mash-up, “Not the Messiah” — “going literally from the sublime to the ridiculous,” as he puts it.

After singing Bach in Richmond, he's off to Amsterdam's Concertgebouw to portray Caliban in “The Tempest,” an opera on Shakespeare's fantastical play by the contemporary English composer Thomas AdA"s. He made his recorded debut in an Australian Opera production of Prokofiev's “The Love for Three Oranges.” And he's mastered the speedy comedic art of Gilbert and Sullivan, as he showed last season in a Virginia Opera production of “The Pirates of Penzance.”

Such variety is typical for American tenors, who unlike many Europeans tend to be jacks-of-all-trades, Ferguson observes: “We're well-schooled in vocal technique and have easy, uncomplicated vocal timbres, giving us the ability to move through many different types of repertory. I'm still young, still developing” — tenors' voices typically don't ripen until they're in their 40s — “and I could still go in a lot of different directions. Some of the opera I'm singing now I can imagine doing 10 or 15 years from now. Or maybe not.”

One direction he's intent on following: “Concert and recital work is pivotal to what I do. I've spent a lot of time thinking about texts — making the sound and intent of words very clear — and as valuable as that is in opera, it's even more important in projecting a song text. I also make a point of doing at least half of my song programs in English.”

Connecting with an audience is an art form in itself, he says. “When I perform, I think about how to communicate with the classical aficionado, but also with my father,” Allen Mead Ferguson, an investment banker who claims little musical expertise. “Sing for the long ears and the short ears,” the younger Ferguson says, “and you'll really reach people.” S