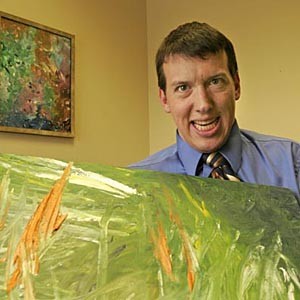 “For too long, people with disabilities have been marginalized in our town, like so many cities,” says Fred Orelove, executive director of the partnership. “Jack's life work is to make life meaningful for those individuals — to give them dignity and an equal chance to work and enjoy the gifts Richmond has to offer.”

Since he was 25, Brandt has helped shape legislation statewide and nationwide, becoming a leading expert in disability policy. His time developing legislation as a governor's fellow under Gov. Tim Kaine and as an intern with Sen. Michael Enzi laid the groundwork for his appointment to the Statewide Independent Living Council, which has elected him chairman.

Brandt has cerebral palsy, and he not only shapes policy to benefit people with disabilities, but also mentors others with disabilities so they may become self-advocates. He currently mentors two students with disabilities who've just begun college. He's helping them navigate through the change to a world beyond parents and the accommodations of high schools.

Brandt is finishing up a master's degree in rehabilitation counseling at VCU, hoping to assist people with disabilities find employment and continue to be advocates for themselves in the professional world.

Brandt's charge to help “people with disabilities to be productive members of society through positive policies” is a heavy one, yet he stills finds time to pursue his passion as an artist, and his oil paintings have been featured in shows around the state.