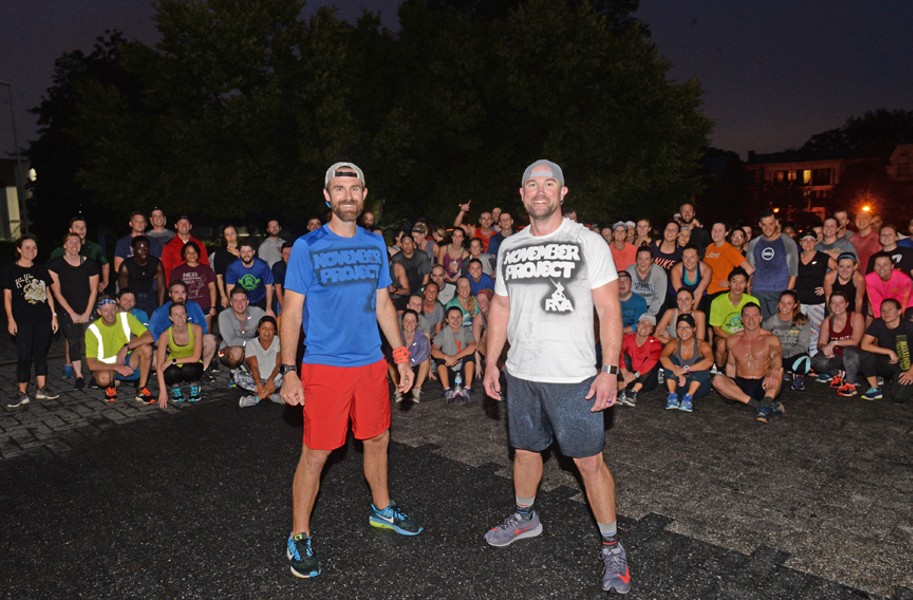 It was cold, dark and drizzly on the morning of March 15, 2017. But that didn't stop about 30 people from showing up at the Virginia Museum of Fine Arts for a free 6 a.m. workout. That group has since grown, including anywhere from 150 to 330 Spandex-clad people every Wednesday morning, everyone ready to sweat their way through a series of running intervals and bodyweight exercises.

It's called November Project, and it's part of a global movement that promotes free, come-as-you-are workouts in cities all over the world. At the helm of Richmond's chapter are Ja Jones and Chris Kerns, longtime friends and fitness fanatics who wanted to direct their energy toward something new and meaningful after Kerns lost his sister Sara in 2016.

"The more I looked into it, the more I read about it, I was like, this is honestly an awesome, positive thing to put my time toward," Kerns says. "It's free, it can get people moving in the right direction, it creates connections. It just gives people kind of a place together and there's no barriers for cost."

Recognizing that intense workouts can be intimidating, the guys were adamant from day one that Richmond's chapter would be accessible to everyone, regardless of fitness level. November Project's mantra is "just show up," and Kerns and Jones take that to heart. For the first few months, they spent hours each week prepping for Wednesday morning, running through the workout not only to make sure they were comfortable coaching, but to check for gaps that might exclude anyone with less experience.

"You get to be part of a movement with a purpose," Jones says.

And for them, that purpose is about more than just fitness. They love hearing weight-loss stories from participants and learning that someone just signed up for their first half marathon, and the people who show up Wednesday mornings expect to work hard. But they've also created a place for community within November Project. Social circles have formed among folks who would've never otherwise met, new roommates have found one another, and a couple who met through the workouts even asked Kerns to officiate their wedding.

"We want people to meet the person that will inspire them to keep working out," Kerns says.