How local bakers are embracing naturally leavened breads, and why they may be healthier.

In a post-gluten world, rustic country loaves are making a surprising surge across Richmond. Bread programs have put baskets of crusty slices back on restaurant tables, bakeries sell out of boules and baguettes by lunchtime, and flaky pastries are returning to office breakfasts.

Whether you call it sourdough, natural yeast or wild yeast, this deceptively simple combination of flour and water ferments bread to create rise. That may even be healthier — food scientists and bakers argue that the fermentation process makes naturally leavened bread easier to digest for those with gluten sensitivities.
Baking with a dough starter is anything but easy, which is exactly why chefs and bakers are attracted to the challenge.

“It’s a very unforgiving process, but it’s never boring,” says Olivia Wilson, a longtime pastry chef and co-owner at Chairlift and Brenner Pass. “It’s a living thing and I can’t always control what happens. I have to believe it will be OK.”

A levain, or sourdough starter, is basically a culture of wild yeast and lactobacillus bacteria. Mix a grain like rye flour and unchlorinated water, then let it sit uncovered on a kitchen counter for a few days. That creates a friendly host environment for those cultures, which live on grains and in the air. Spend several days mixing in specific amounts of fresh flour and water, and voila — a levain is born. Add salt, more flour and water, then bake.

These yeasts and lactobacillus eat various sugars and starches, and must be fed more flour and water daily. As they eat, the lactobacillus creates lactic acid gas, which raises the bread and creates a sourdough taste.

Wilson feeds her starter three times a day to minimize the sourdough flavor. She uses the starter to make bread, brioches and bagels.

“Once you taste the difference, you don’t ever want to go back,” Wilson says of natural-yeast baking. “The bread is more light, floral, fruity, even nutty like the flour you are using. It’s not the strong sourdough flavor people think of.”

Wilson talks about her starter the way others talk about pets or children.

“It’s at my house right now because they were insanely busy at work last night but someone had to feed the starter at 9 p.m. It has traveled back and forth with me to the restaurant, and travels with me to visit my parents. It’s quite the relationship.”

Jay Metzler remembers the sad morning two years ago when Jerome died. Jerome was the starter Metzler had been feeding twice every day since opening Idle Hands Bread Co. in 2015. Then, every natural-yeast baker’s nightmare: Jerome wouldn’t rise after an employee botched its feeding.

“It was terrible,” Metzler says. “We had to shut down completely for two days.”

With no starter, Metzler’s hands were truly idle. He found another local starter and began the time-consuming process of feeding and waiting. The quick fix of commercial yeast never entered his mind.

“We sell a product that is made a specific way, based on the way it was done for millennia, and that is the way I feel bread should be eaten.” Metzler says. “There’s something in the fermentation process that changes the way gluten affects our body. I’ve had tons of people who say their doctors tell them they are gluten sensitive, but they eat my bread on a regular basis.”

“Commercial yeast is kind of foolproof,” Metzler says. “But with natural yeast, you’re baking more by process, timing and touch than by ingredients. It’s super challenging and incredibly arduous and annoying, but really fulfilling when it is done.” 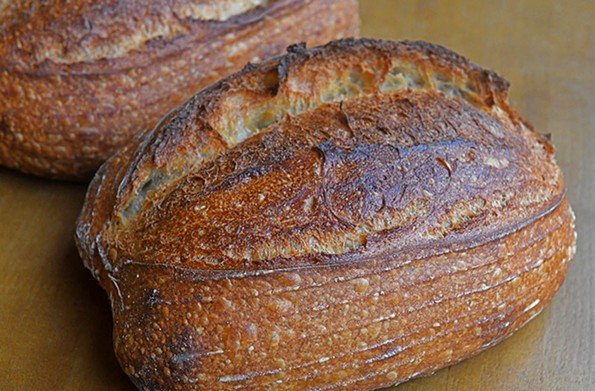 Does a Starter Show Its Age?

Evrim Dogu at Sub Rosa has had near misses, but his starter has been going now for 10 years. Although he points out that a starter’s age is more about romance than science.

“A starter is really only as old as the last time you fed it,” Dogu says. “Calling something that is constantly dying and starting again ‘10 years old,’ what is that? It’s like saying humans are a million years old. On one level that’s accurate, but on another level it’s not.”

For Dogu, who uses his natural levain in all but one of Sub Rosa’s breads — the pastries use some yeast — commercial yeast is just another way to accelerate artificially the impatient speed of modern life. He’d rather move at a more natural pace.

“At Sub Rosa we work in rhythms,” Dogu says. “We mill the flour the day before, then mix our dough. We fire the oven and ferment the bread the day before we bake. Those are the one- and two-day rhythms.”

“Then we have larger rhythms, like planning the season ahead and what crops of wheat we’ll buy,” he says. “The idea of feeding the starter every day is part of that cycle. That makes it feel real and alive, and that’s what natural yeast is.”

It seems that while sourdough may be a challenge, it’s a peaceful one.