Can you tell me how to get to “Avenue Q?” 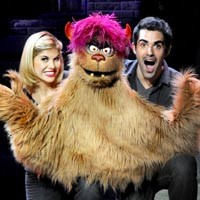 Puppets can be liberating, says “Avenue Q” co-creator and songwriter Jeff Marx, especially for writers in search of a little creative freedom. “Puppets are so friendly and disarming that they can get away with a lot of things that would be offensive if humans said or sang them,” Marx says.

After a run on Broadway lasting more than six years and 2,500 performances, Marx's popular musical is scheduled to play three shows at the renovated Carpenter Theatre at Richmond CenterStage on Nov. 6.

“It was about us in a very specific time in our lives when it really sucked to be us,” Marx says of the production's successful longevity. “We were trying to find our purpose and it turns out we weren't the only ones going through it. A lot of people seem to be going through the same journey and [could] relate to it and find comfort in it. I guess misery loves company.”

Developed alongside fellow writer Robert Lopez, Marx's “Avenue Q” debuted off-Broadway in the Vineyard Theatre in 2003. Picked up by the big-league theaters shortly after, the musical would go on to win three Tony Awards in 2004 for best musical, best book and best original score, telling the parentally advised story of a puppet named Princeton and his life among the residents of a low-end New York City street.

With good-humored tunes such as “What Do You Do with a B.A. in English?,” “If You Were Gay,” “Everyone's a Little Bit Racist,” and “You Can Be As Loud As the Hell You Want (When You're Makin' Love).” Marx says of the musical's twisted PBS perspective, “It was all supposed to be amusing and entertaining but every one of those songs started with a sad kernel of truth about our own lives. We just kicked sand over each idea enough that we made it amusing and less preachy.”

“It is very much an adult ‘Sesame Street,'” Marx says. “Bob and I loved ‘Sesame Street' growing up and we kind of missed that friendly kind of instruction and wished there was that kind of show to help us get along after college and find our own way in the world. So we started writing the instruction manual that we wished had existed for us.” S