“It Was a Life Changer”: Man Completes Motorcycle Adventure from Virginia to South America

It was March 1 and he was in Ushuaia, Argentina, the southernmost point of South America.

The day was cold and windy. He couldn’t put the scenery into words. He had made it after eight months of traveling through 15 countries.

“When I arrived in Ushuaia, I was overcome with emotions because I had at that point experienced, on a motorcycle, any and all manner of roads, people, cultures, food,” Carroll said.

“I was overwhelmed with joy with having made it because it took me so long to get there. At the same time, I was consumed with the beauty of it all.”

At 47 years old last April, the Chesapeake man set out on a cross-continental motorcycle tour, saying it’s always been his dream to travel the world. He quit his job at the Coast Guard Command, Control and Communications Engineering Center in Portsmouth; sold his belongings or put them in storage and bought a 2014 BMW motorcycle.

He planned to make a loop of North and South America, going from the most northern tip of Alaska – the town of Deadhorse near the Arctic Ocean – to the southernmost point at Ushuaia.

Originally, Carroll said, he planned to return to the U.S. in November or December of this year, but the trip was shorter: 13 months in which he traveled a total of 42,000 miles. 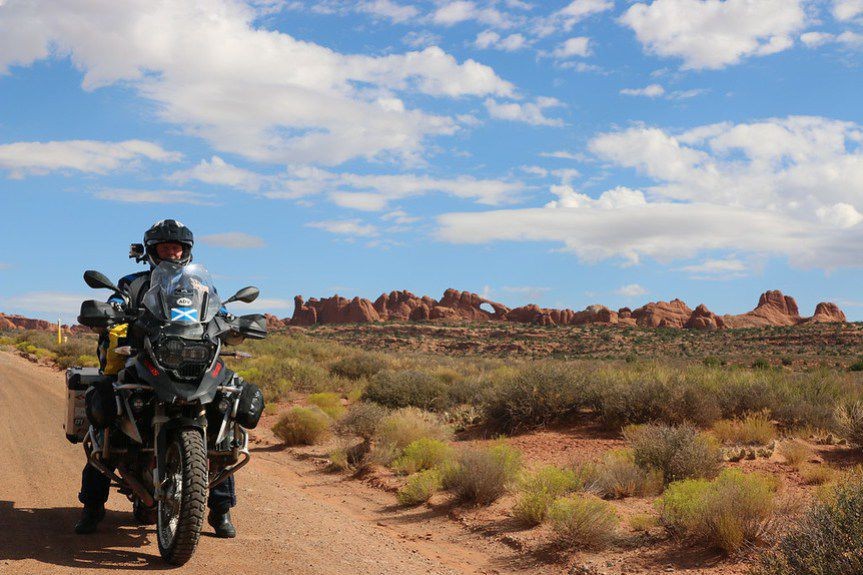 “The world, at least the Western Hemisphere, is full of purposeful, striving and very happy people,” Carroll said. “The impression we’re given in the U.S. is not the case. Having lived there, it’s also nothing to fear.”

From his journey, Carroll has gained a new sense of patience, whether it was waiting on food or in the sit-still traffic of Peru.

“We don’t need to be in some huge hurry all the time,” he said. “When you do slow down and reflect for a moment or two, you realize the world is an amazing place. I think people lose sight of that in their 9-to-5 race to the end.”

Carroll also gained a new appreciation for people. During his travels, he said, the people of Central and South America not only invited him into their homes as a guest, but they also treated him like royalty.

“It’s likely you may displace the occupants of the master bedroom because they want you to have the best,” he said. “The people are great.”

On his website, www.lovinglivingadventuring.com, Carroll kept a diary called “Dispatches from the Road” to document his trip. He had written 17 entries, or episodes, as of April 23.

In one, he documented a bad week in Guatemala last October. What started as “a bit of a fever and a slight cough” turned into “a noticeable fever, body aches” and a rash. He originally thought he had dengue fever, a mosquito-borne virus. It turned out he had Zika.

After about five days of bed rest, he said he thought he was better and tried to leave, but was T-boned by a vehicle.

“It was not a good week for me,” Carroll said, adding that he’s just letting his body naturally rid itself of the virus.

Now in Charlotte, N.C., Carroll is visiting family and plans to reunite with his partner, Tracy, in Washington state, where he’ll be looking for a job.

Despite returning to regular life, he said, the memory of the sites, sounds and people of the Americas will always stay with him.

“It was a life changer,” Carroll said. “I just encourage people to not be so afraid of the world and don’t let that be what holds them back from exploring and seeing how beautiful the planet we live on is.”