It Takes a Village

Richmond Triangle Players’ “2 Boys” strips it down to good effect. 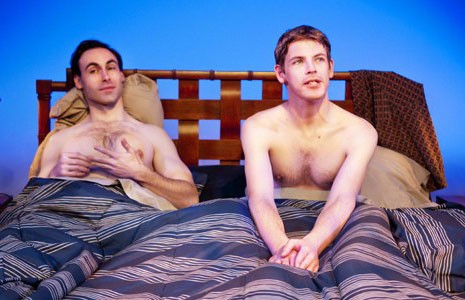 If paring down is a recipe for success, Richmond Triangle Players' "2 Boys in a Bed on a Cold Winter's Night" would be a triumph simply on its staging alone.

The show has no cast supporting its two leads and no intermission. There's no extraneous dialogue or shifts in setting. And while they're on stage, the actors have few if any clothes on.

The play takes place in a Greenwich Village apartment at 5 in the morning. The year is 1987, and Daryl and Peter are in bed after hooking up in a one-night stand. While tough guy Peter (Nicholas Wilder) would rather go to sleep, sensitive Daryl (Nick Baldock) wants to learn more about his new bedmate.

The two reminisce about their earlier days in New York, naming gay bars and pickup spots such as 53rd and Third, Uncle Charlie's and Central Park's Rambles. From there, the conversation winds around the personal and trivial, both characters revealing small portions of themselves while evading other facets. Though they've been physically intimate and sexually frank in conversation, they're still a long way from revealing who they really are.

Baldock puts up a veneer of vulnerability and longing in Daryl, letting his private issues simmer underneath. Wilder plays up Peter's more manipulative traits, portraying the character as a sort of jaded gunslinger. The duo is impressive together, letting the tension between them boil to a fever pitch at the show's climax.

The dialogue of James Edwin Parker's script plays naturally, never overreaching for some easy metaphor or quasi-poetic soliloquy to sum up the show's point. This is the aftermath of a one-night stand, and this is how two emotionally damaged men have decided to cope with their issues. Justin Amellio's lean direction keeps the audience riveted. With the exception of a brief space at the play's exposition, the show is simply the unbroken dialogue of its two characters.

With its racy material and devastating conclusion, "2 Boys in a Bed on a Cold Winter's Night" is a taut emotional drama and one of the best shows so far this season.