It Starts in Parks

Two of Richmond's venerable public spaces get ready for their close-ups. 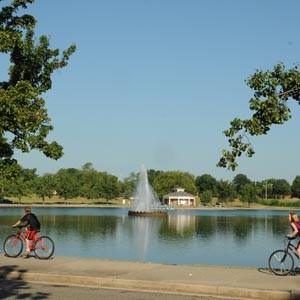 Two of Richmond's sprawling, old school pleasure parks, Byrd and Forest Hill, are so entwined in Richmond's verdant terrain that lots of us pass these familiar haunts on a regular basis without acknowledging what a tonic they provide our frayed nerves and frenzied days. But occasional, unexpected changes at these taken-for-granted precincts smack us in the face: We see things afresh and with renewed appreciation.

Recent enhancements at Byrd Park, our city's largest greensward, and Forest Hill Park on the South Side prompt such a jolt. Byrd Park's Fountain Lake has received a welcome amenity with a handsome new brick concession structure while the lake at Forest Hill Park has recently returned to, well, lake status after being swamplike for far too long. Bottom line: Summer in the city is better this year.

Fountain Lake, immediately east of a stretch of the Boulevard that clears the Christopher Columbus monument and swings around the reservoir, is one of Byrd Park's three lakes. It, like the others, was molded from an extended ravine that once cut toward the James River. The lakes were just one feature of an ambitious and long-range development plan that city engineer Wilfred E. Cutshaw doggedly maneuvered through City Hall from 1873 to 1907 that made Byrd Park, at 300 acres, Richmond's largest public open space. Like Manhattan's 700-acre Central Park, it offers a broad range of activities — including passive natural areas, athletic playing fields and a highly programmed cultural line-up of exhibitions, theater, dance and music.

A landmark centerpiece of Byrd Park is Fountain Lake. It is punctuated by a 37-foot wide ornamental spray fountain which at some time long past was illuminated, courtesy of the Department of Public Utilities. And although once-popular wooden row boats have given way to gaudy plastic paddle boats, the lake still draws fishermen. And wildlife stands a chance here: On a recent Sunday afternoon a Canadian goose navigates the shoreline trailed by nine obedient goslings.

The big news at Fountain Lake, however, is the new, eight-sided, red brick concession building that is architecturally ambitious enough to have been officially christened the Landing. Designed by the local architecture firm of Worley and Associates, the Roman Doric-styled park house pulls cues from, but doesn't mimic, a number of Richmond's late-19th century octagonal Richmond park houses. The nearest example is the Round House, finely articulated amid a grove of ancient oak trees slightly to the southeast of the lake.

The Landing has a crisp, peaked roof that leads to a multiwindowed monitor. The building houses public restrooms (with waterless urinals); offers free Wi-Fi and has a terraced area furnished with attractive picnic tables topped with dark green umbrellas. Sally Bell's, the grande dame of Richmond's casual eateries, has recently opened a concession here and has added hot dogs and hamburgers to its decidedly Southern menu of chicken salad and ham rolls. 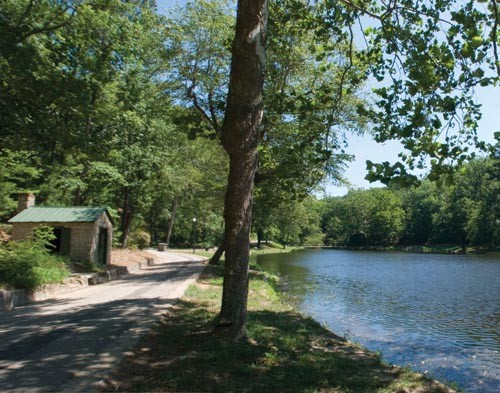 Forest Hill Park was once untamed farmland and the site of a country estate. For years, its swampy lower reaches (and lonely hut) attracted more mosquitoes than visitors.

Change has also taken place across the river at Forest Hill Park. The weekly farmers' market is drawing crowds here, but there are quieter pleasures, too.

The newer of the two parks, Forest Hill became city property in 1933 after having served for more than 40 years as a privately owned amusement park at the terminus of a major street car line. Before that, it had been farmland and a country estate, Boscobel, which means “beautiful woods” in Italian.

It being the Great Depression when the property became a public park, the federal Works Progress Administration put folks to work paving foot paths through those woods with cobblestones. And at the bottom of a plunging ravine through which Reedy Creek flowed, a stone-walled and slate-roofed gazebo was installed along with a small warming hut for wintertime lakeside gatherings when the lake froze over — sounds quaint, doesn't it? When was the last time that happened?

By the 1970s, however, suburban development upstream along Reedy Creek had fed enough sediment into the lake that it had become a designated wetland. Some well-meaning environmentalist insisted that this was a natural development and successfully advocated a hands-off policy on the site. But a bog is a bog and many neighbors and park officials reached the conclusion that the lower reaches of Forest Hill Park had hit bottom. Miraculously, the space has been returned from malaria-pit wannabe to something resembling its former, admittedly unnatural, glory. Now all we need are some cold, old-fashioned winters and a frozen lake.

During the next few weeks, as beaches, bays and mountains beckon, this may be the season to rediscover some renewed local pleasures.