An Ashland theater company takes the story of Anne Frank online for April. 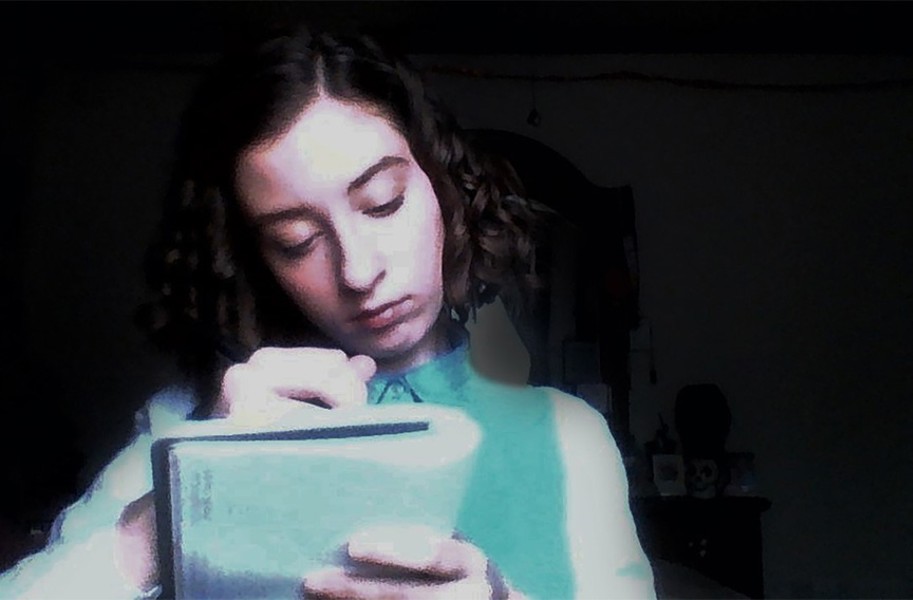 Whistle Stop Theatre Company is known for creating original works of family theater based on classic works of literature. This spring, founding artistic director Louise Keeton had planned to begin working on the third annual Ashland Summer Theatre Festival, featuring a production of “Anne of Green Gables.” Local businesses would have hosted family-friendly activities as part of the festival. Keeton says the decision to postpone was a difficult one, but she’s been buoyed by the response of her community.

“Immediately after we announced postponing the festival, our audience and our artists started flooding my inbox asking what we could do to continue to bring family-friendly entertainment to our community,” she says.

At Whistle Stop, Keeton strives “to identify what it is about these stories who have endured the test of time and how that can empower modern audiences.” So, when she started thinking about our current moment, and what she could do to continue to provide the same kind of entertainment, “The Diary of Anne Frank” came immediately to mind.

“I read through her diary that night and identified six entries that reflect on what we are all experiencing right now - feelings of isolation, mourning and hope,” Keeton explains. “I thought, if I could have an actress learn each diary entry and perform it to the camera, it would be as if Anne were keeping a video diary and she could speak directly to an audience who can empathize with her on a whole new level.”

Keeton reached out to Kadyn Noelle Bunting, a young actress who was initially slated to play Anne in “Anne of Green Gables.” But now she’s working on embodying a very different literary Anne, in Whistle Stop’s new production, “Anne Frank: a Six Part Digital Series.” The series, which can be viewed on the Whistle Stop Theatre website or Facebook, will feature six short prerecorded performances of Bunting, dressed as Anne Frank and speaking directly to us through the computer screen, delivering her most relatable diary entries orally.

“I believe sharing Anne’s story through this medium provides the opportunity to connect with our audience intimately and that’s something I’m willing to explore and embrace,” Keeton says.

To make the videos, Keeton selects relevant diary entries and sends them over. Bunting memorizes them and gets into costume. And then, they get together over video chat and “we just run through the entry until we get to one that we both like and feels really good,” Bunting says. Then Keeton edits and posts the performance.

It’s a different experience, Bunting says, than she’s had before, though she and Keeton have been working together since she was a child. “There definitely is something about waiting in a theater for a show to start and getting the adrenaline of watching the actors on stage,” Bunting says, “but it’s easier for a lot of people and more accessible for a lot of people to watch theatrical productions online and still get the same feeling as being there in person.”

Bunting says she felt honored and called to duty when Keeton contacted her about playing Anne Frank in this series.

“I knew I needed to say yes to get her story out during this time. Isolation is something everyone is dealing with right now, and some can deal with it better than others,” Bunting says. “I feel like this series can help a lot of people try to figure out how to cope with it and how lucky we are that it really is just isolation.”

Keeton says Anne Frank’s story resonates because, despite the different circumstances, these feelings of isolation, of loneliness, might just be universal.

“Anne Frank steps directly out of history and shares her experience so empathetically through her diary entries,” Keeton says. “I found myself relating to her deeply when I read lines like, ‘So much has happened, it’s as if the whole world had suddenly turned upside down’ and feeling encouraged when I read lines like, ‘The best remedy for those who are frightened, lonely or unhappy is to go outside,’ and I knew others would [relate] too.”

The series is meant to provide both entertainment and education, as is typical for Whistle Stop productions. Usually, Keeton would send over some educational materials to local teachers during the run of a show, but this time, she is providing remote, interactive opportunities for audiences and families at home to learn more and “to bring our audience into the conversation.” After each performance in the series goes live, educational materials like worksheets and writing prompts are shared on the Whistle Stop Theatre Facebook Page every Monday, followed by Tuesday morning community conversation starters.

“It means a lot to me to create content that can apply to the classroom and SOLs,” Keeton says. She adds that, as artists, “I believe we have a responsibility to start conversations and share stories that will not just entertain but inspire and empower.”

By sharing Anne’s story through this digital series, Keeton says, “I hope we can help our audience feel less alone and bring them a sense of hope.”

The Whistle Stop Theatre Company’s “Anne Frank: a Six Part Digital Series” can be viewed on the Whistle Stop website: https://whistlestoptheatre.weebly.com or Facebook page: https://www.facebook.com/TheWhistleStopTheatreCompany. New episodes go live every Thursday evening throughout April, and new educational resources can be found on Facebook the following Monday and Tuesday.