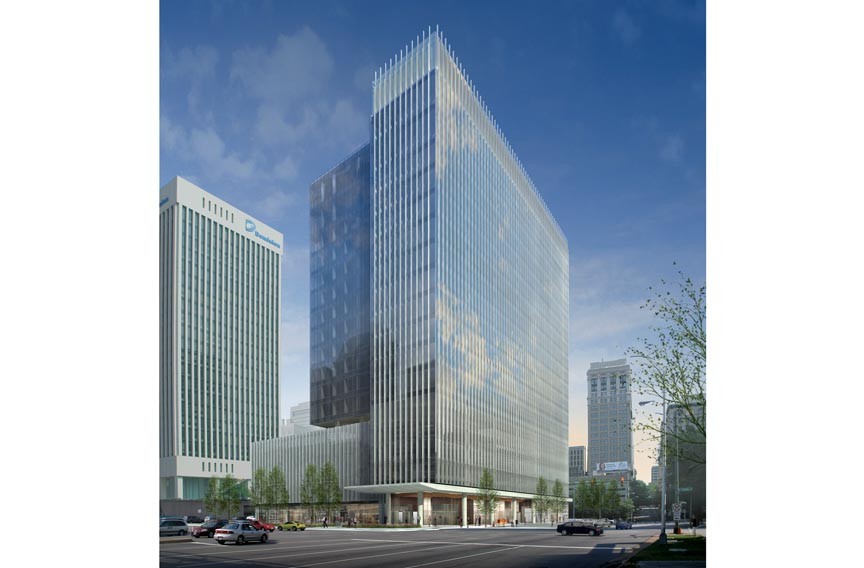 John Clark is a Richmond lawyer, friend and keen observer of how architecture affects city life. He chides me for not critiquing projects before they’re constructed. I respond that many factors can be observed only with a completed project. These include the ways a building creates space (both exterior and interior), how a structure responds to its environs, the landscaping, use of materials and how inhabitants interact with spaces. These things can’t be seen in renderings or read in site plans. And importantly, when a project is complete, both the reader and I are looking at the same place and space.

But with excavation work churning away at Gateway Plaza, there’s high interest in what’s coming to this prominent site — an 18-story, 261,000-square-foot office tower in the block bounded by Basin, Bank Canal, Eighth and Ninth streets. The site in downtown’s financial district is situated at the northern axis of the Manchester Bridge, a gateway to downtown. So for decades city officials have envisioned an iconic building here.

The Eighth Street Connector, a diagonal cut-through road designed to feed the Manchester Bridge, recently was eliminated, and traffic now takes a few new and sharp turns. The speed with which traffic patterns were altered speaks well of both the city’s ability to get things done speedily when stars align, and of the clout of McGuireWoods, the storied, Richmond-based law firm that will occupy 217,000 square feet of the building.

But it isn’t the showy site or delight in published architectural renderings that prompt me to contemplate Gateway Plaza before its concrete, steel and glass punctuate the skyline. I question whether this new project will do much to mend the urban fabric, especially the walkability of the vicinity.

The site is problematic for reasons dating back more than 200 years. And more recently, various architectural, transportation and planning decisions have made this a downtown island, despite being the spoke of the surrounding financial district.

Historically, this block is unique. While most other downtown tracts have a third and even fourth building occupying the plot, incredibly, this is the first piece of architecture on this site since English settlers came ashore here in 1607.

True. The site probably was forest until the early 19th century, when this block — plus three others to the east now occupied by the James Center — was excavated to be the turning basin, an inner harbor of the James River and Kanawha Canal system. Sometime in the late 19th century, this and the adjoining blocks to the east were filled and served as rail yards for many years. From the mid-20th century until just a few weeks ago, asphalt parking lots occupied this last, undeveloped basin block.

McGuireWoods occupies one of the James Center buildings across Ninth Street. This maritime past is celebrated by a large bronze statue of naked canal boat men, muscles straining, while they hoist the sails. (Incidentally, canal boats didn’t have sails.) This last vestige of history will be forgotten with completion of the glistening and glassy Gateway tower, designed by the Forum Studio architecture firm. With one exception: Plans call for retaining the weathered, granite cobblestone alley that brushes the site’s north side, connecting Eighth and Ninth streets.

As to why the site is problematic, in comes in five words: Manchester Bridge and Downtown Expressway. In the 1970s, in their enthusiasm to move commuters into and out of downtown with maximum speed, planners encircled the Gateway block with broad, one-way streets. Mornings and late afternoons, while cars enter and exit nearby decks and onto the streets, it’s an understatement to describe the walk here as unpleasant. Even when traffic subsides, the extended expanses of asphalt and concrete are problematic.

Recently, efforts have been made to rethink — humanize even — Kanawha Plaza, the bunkerlike park that straddles the expressway to the immediate south of the Gateway site. It was built in the 1970s to physically connect the Federal Reserve Bank with downtown. But the problem rests not with the park’s design. In fact, architectural brutalism is coming into vogue again. The park has good bones but the problem lies with all that swirls around it: too many traffic lanes and nearby expressway ramps. Plus, the Federal Reserve Bank to the south is an armed camp complete with post-9/11 bollards, boulders, iron fencing and guard houses. And the Dominion Resources building sits atop an isolated, pedestallike plaza to the west.

Unfortunately, the Gateway Plaza site shares these isolating factors with the park. It too is surrounded by streets designed not for pedestrian convenience and comfort, but by too-wide expanses to accommodate vehicles making hasty entries and retreats. Gateway is bordered by the Dominion bunker. And on the north, just beyond cobblestones of Basin Bank Street (a welcome grace note) and a thin parking strip, is an unlovely, six-level parking deck.

And so for my lawyer friend Clark and other observers, here’s what to expect: Gateway Plaza will read as a dazzling beacon, especially after dark, from South Side and the Manchester Bridge. But it will have an equally prominent back door on the Cary Street side where cars will enter and exit the in-building parking deck. And don’t even think of curbside parking, cab stands or bus stops, amenities that serve to calm traffic. So those who work in the building, or those contemplating visiting the building’s 10,000 square feet of retail, will think twice about crossing the too-wide streets.

But it could be worse. No enclosed, above-the-street crosswalks — real killers of sidewalk life such as those found at the James Center or Altria’s downtown research and technology center — are envisioned for Gateway. Be thankful for that.