Henley Street brings the brutality with "Lord of the Flies." 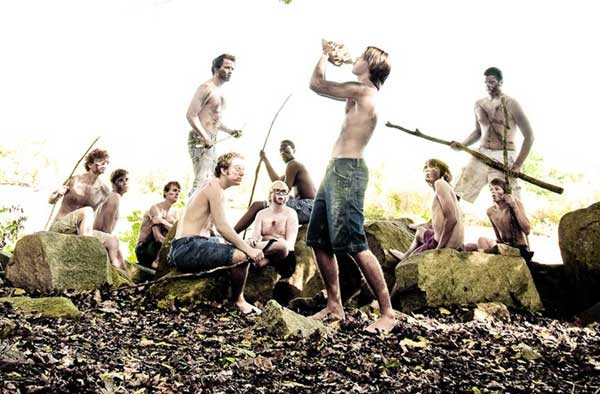 Many of the things that make William Golding’s “Lord of the Flies” compelling on the page make it a potential nightmare when adapted to the stage. “You’ve got murders, a dead parachutist, people falling off mountains,” director Josh Chenard explains.

When he accepted the job of directing Henley Street Theatre Company's adaptation of the celebrated but occasionally brutal novel, which opens Jan. 26, the director acknowledges, "I was thrilled and terrified."

And while the interpretive theatrical problems loom large, they're dwarfed by a more straightforward management issue: How do you mold a rambunctious, testosterone-laden cast of actors ranging in age from 12 to 22 into a disciplined ensemble? "We just gave them shots of Robitussin before every rehearsal," Chenard jokes.

The actual solution required Chenard, whose last directing effort was "Suddenly, Last Summer" in the fall for the Richmond Triangle Players, to reverse his usual methods. "In the past, I've had to work on building up energy toward opening night so people are peaking at the right time," he says. "With this production, I've had no problem with energy. Instead, I've needed to figure out how to harness and focus it. I spent a month on technique working with animal imagery before I even got down to blocking the show."

As to how he planned to evoke the tropical island setting of Golding's book with all of its stark primitivism, Chenard says that took it as a positive challenge. "I thought, 'Let's not get stuck on the bells and whistles.'" Instead, he focused on staging the story "simply and beautifully," with an emphasis on the language. "Everyone's read the book," he says, "so being true to Golding's words was most important to me." Keeping the running time reasonable was another priority. "The typed script is mammoth; you could make it run three or four hours," he says. "I'm more of a two-hour director."

The Henley Street production will be one of the first events in the statewide Minds Wide Open celebration, a cooperative effort led by the Virginia Commission for the Arts that chooses a subject to focus on each year. For 2012, it looks at children and the arts, something "Flies" will explore both on stage and behind the scenes. With a grant from the Rotary Club of Richmond, Henley Street has been able to hire 10 high-school interns to work on the play. "They're incredible problem solvers," Chenard says. "We have a lot of spears we had to make out of bamboo sticks and these guys are great with a glue gun."

"Flies" also will be Henley Street's entry in Richmond's annual Acts of Faith theater festival, a choice inspired by the symbolic subtext of the story. "There are many larger philosophical issues explored in this show — civilization versus anarchy, the influence of mob mentality," Henley's Artistic Director James Ricks says. "And with such archetypical characters, you can make the biblical associations."

Asked if he was worried that the violence in the story might make some audiences uneasy, Ricks replies: "I've never been concerned about stuff like that. We're not doing it for shock effect; this show explores our basic humanity and violence is an inescapable part of the human condition."

With Henley Street celebrating its fifth year, Ricks seems more confident in the company's ability to draw audiences to see more challenging material. "I think we've been able to set ourselves apart from the crowd; there's an opening for us ... to retrain Richmond audiences a bit," he says. "We're going to stretch ourselves as much as we can." S