Is Richmond a Bike-Friendly City? 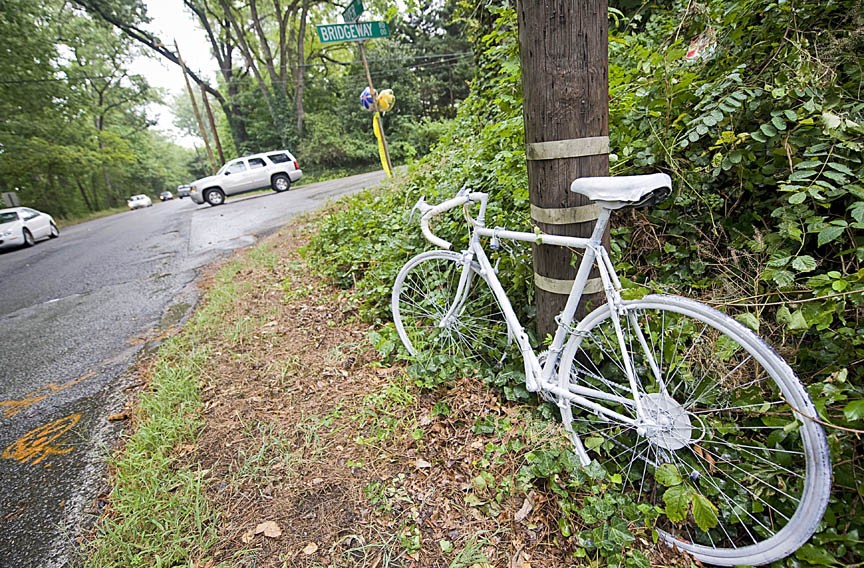 While they mourn the death of Lanie Kruszewski, the 24-year-old killed in a hit-and-run on River Road two Sundays ago, cycling advocates are pondering bike safety.

Richmond has been touting itself as a bike-friendly city with lane markings that remind drivers to share the road and trails, such as the Cannon Creek Greenway, which opened in April. The pressure's on, because Richmond is host to the massive UCI Road World Championships — and hundreds of thousands of cycling fans — in 2015.

But cycling in the city remains a dangerous proposition, say several of the more than 100 riders who gather at the James River overlook in Oregon Hill on Sunday to honor Kruszewski with a memorial ride.

"I have to swerve to avoid getting hit almost every time I'm riding," Fan resident Allison Rey says.

"It would be so much safer to ride if there were more designated lanes," says Donna Crewe of Henrico.

"Bike lanes aren't enough," says Trent Mason, who also lives in Henrico. "People need to be aware of bikes on the road, just like they would a car. It's a simple mind-set about bikes that needs to change."

Kruszewski was an experienced bicyclist who was riding to her boyfriend's Museum District house from work when she was killed on River Road near Bridgeway around 10:20 p.m. on July 29.

A grand jury indicted Elias Steven Webb, 30, on a hit-and-run charge Monday. Police say he admitted he was driving the Dodge Durango that struck her. Citing sources, CBS-6 and the Times-Dispatch reported that Webb told police he thought he hit a deer. Police have said they believe Kruszewski's bike had a working light and reflector.

"It was dark, but there was a clear line of sight" at the place where Kruszewski was struck, Amy George says. She's an avid cyclist and member of the city's pedestrian, bicycle, trails and planning commission who joined the memorial ride. There's no shoulder at that point on River Road for a cyclist to use.

While the case works its way through the court system, cyclists reflected on their own experiences with Richmond's roads.

George was struck twice by cars soon after she moved to Richmond in 2000. The first time, she says, she got "doored" — a car parked on Cary Street opened its driver's side door while she passed and sent her flying across the street. "It was like a pinball," she says. The second time was what cyclists call a "left cross" — a car turned left and hit her when George had the right-of-way. She wasn't seriously injured either time.
State law requires motorists to give cyclists at least two feet of clearance when passing on the left. "And that's never enforced," George says.

Her cardinal piece of advice for cyclists: "Don't bike like you would drive." For instance, commuting cyclists sail along Broad Street instead of choosing the lesser-traveled, parallel streets, such as Grace or Marshall. This year Virginia Commonwealth University is offering an urban cycling class for the first time to teach students how to avoid accidents and ride defensively.

As planning for the 2015 races gets under way, Richmond will need to address a transportation culture that's hardly bike friendly, says Jon Lugbill, executive director of Richmond Sports Backers and a member of the Richmond 2015 executive committee.

"The lack of bike lanes and multipurpose trails — your basic bike infrastructure — we're really weak on," Lugbill says. "We got a long ways to go."