These Richmond social media users seem to think so. 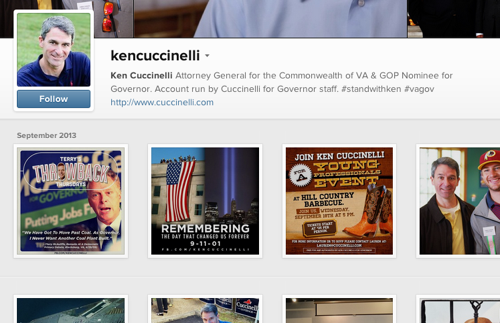 A recent following spree by Republican gubernatorial hopeful Ken Cuccinelli on the social media outlet Instagram elicited a few strong reactions among Richmond users, mostly along the lines of #eww.

While Cuccinelli has been active on most social networking platforms, his attempt to infiltrate the hipster corner of Instagram appears to be a struggle so far. The reaction around Richmond to follows from his account seemed mostly that of shock.

While such reactions may represent votes against Cuccinelli in general, those taking the time to peruse his Instagram feed might also have been disappointed. Great Instagram opportunities ranging from Waffle House to a litter of kittens are squandered by poor composition and an apparent lack of understanding of the nuances of the site’s various filters.

Regardless of what Cuccinelli is putting out there, until Democratic candidate Terry McAuliffe has an account, Instagram users clearly are missing the chance to make an informed decision in November.