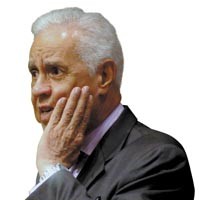 The pollsters and gubernatorial campaign consultants seeking the endorsement of former Mayor L. Douglas Wilder might have first consulted with Dogon, a man with short dreadlocks taking in the 2nd Street Festival in Jackson Ward on Sunday.

itting in front of a large blue “Deeds for Governor” poster tied to a chain-link fence on Second Street, Dogon, who declines to give his full name, patches a bicycle tire, indifferent to both the sign and the ever-elusive political kingmaker.

“He didn't do nothing for us,” he says of Wilder. “He forgot he was black.”

Courting Wilder has long been a campaign ritual for candidates. Both McDonnell and Deeds have met with him, President Obama personally called him and sent a representative to Richmond to coax his blessings. As the legend goes, Wilder's support makes or breaks campaigns. Just ask Chuck Robb.

Despite the somewhat surprising poll findings, political analysts still attest to his powers.

“It's hard to imagine that it's not a blow to the Deeds campaign to have Wilder refrain from endorsing him,” says longtime political analyst Bob Holsworth, president of Virginia Tomorrow, an online political forum.

It used to matter to Richmond. Just five years ago, Wilder, who was in the heat of his mayoral campaign, waltzed down the middle of Second Street during the annual festival like a rock star, attracting crowds of fawning supporters.

Nowadays, Wilder's name elicits a different response. A college-aged man wearing a Deeds sticker brushes him off. “He doesn't matter anymore,” he says of Wilder. Another man, who moves away from a reporter and his political questions, pipes up when Wilder's name is mentioned. He leans back, to make a point. “He's history,” he says, still unnerved by his infamous police detail while serving as mayor. “He had 11 police officers to guard him. For what?”

Three women sitting in camping chairs in front of the New Hong Kong Restaurant, watching the procession of festival goers, concur. Wilder wasn't a very good mayor, they nod in agreement, citing his frequent attacks on the Richmond School Board.

The women get quiet when asked about their voting habits, diverting their eyes. As a reporter tucks away his notebook, Scott smiles coyly and mouths in a whisper: “I'm going to vote for Deeds.”