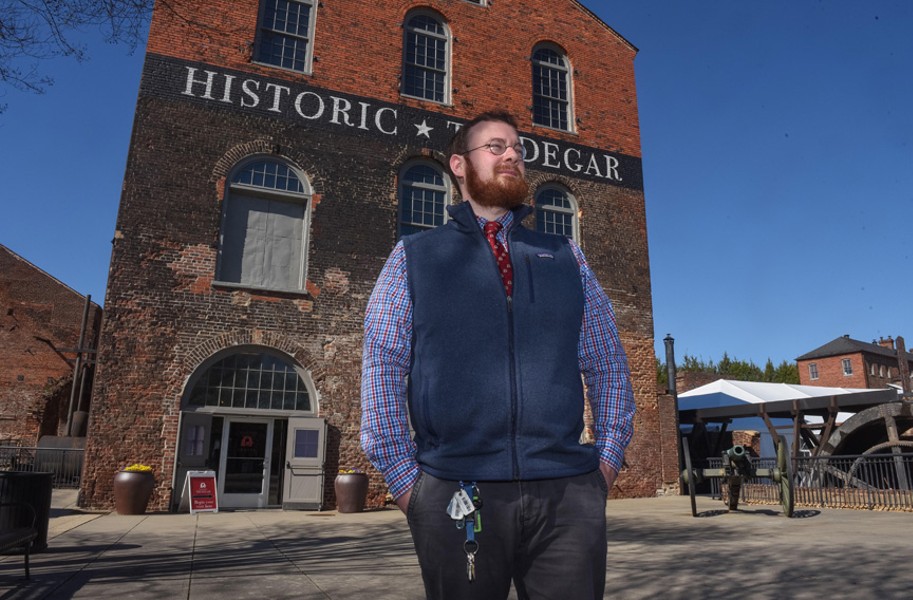 On Sept. 18, 1838, an ironworks engineer named Rhys Davies from Tredegar, Wales, was stabbed to death in an altercation on Belle Isle. The newspaper cryptically describes it as “an evil hour, [during which] he gave way to his passion, and fell its victim.” Police released the unnamed perpetrator.

A new book by Powhatan County native Nathan Vernon Madison can’t solve the mystery of that quarrel, but it offers a detailed look at the city’s most historic industrial site, named in honor of the Welsh foundry where Davies trained.

“Tredegar Iron Works: Richmond’s Foundry on the James” will delight Richmond history buffs who appreciate stories like these:

Joseph Reid Anderson and his descendants ran Tredegar from 1847 until the 1940s, and Anderson took full advantage of slave labor. Not only was it cheaper to rent slaves than pay workers, but Anderson also sought a work force that couldn’t organize or strike. He was an ardent proponent of secession, hosting a rally of secessionist speeches at Tredegar after Fort Sumter, and joining for 10 months as brigadier general. But Anderson helped Tredegar profit off both sides.

Madison reports that U.S. government received 881 Tredegar cannons in the 16 years leading to the war. Then, with the Confederacy headquartered in Richmond partly because of Tredegar, it produced more than a thousand cannons for the Confederate government, as well as armor for ironclad ships such as the CSS Virginia.

Anderson successfully lobbied for Tredegar’s sparing in the fires that preceded a Confederate retreat from Richmond in 1865 and soon had a pardon from President Abraham Lincoln and control of the ironworks again.

Madison focuses on Tredegar’s manufacturing history after the Civil War and sees the company through significant points of American history.

“People just think of it as a Civil War site and don’t think of it as an industrial site,” he says. The plant had more than 40 buildings at its height, and in 1873 it was Richmond’s largest employer with nearly 2,000 employees.

The company rode the railroad boom with great success and bounced back from a depression in the 1870s with diversified production. Government weapons contracts during the Spanish-American War, World War I, World War II, and Korean War sustained operations.

“With the Korean War we were getting more into steel stuff, electronics and bombs. Tredegar was so outdated — they were using machinery from the Civil War.”

Madison cites the company’s failure to convert to steel production as a downfall.

“Everything I see, they’re saying, ‘Oh, we may have to convert to steel at some point,’ but they never do,” he says.

The Oregon Hill neighborhood started as a worker’s town for Tredegar, and Madison’s research uncovered the deep familial ties among the company’s workers. “Not only the Andersons at the top but,” he says, “if you read the payroll ledgers and correspondences, this is a multigenerational thing.”

Madison’s work brings him in touch with numerous descendants of people who worked there, and he wants to digitize the records that would help people research their genealogies through Tredegar. Records left by the Tredegar Co. at the Library of Virginia “have to be one of the most complete corporate archives in American history,” he says.

The foundry closed in 1957, and the buildings served as laboratories and storage space for Ethyl Corp. Hurricane Agnes came through in 1972, destroying many of the buildings.

The 1990s brought new vision and renovations led by the Valentine museum. A Richmond Times-Dispatch article from 1991 notes plans for a laser show, boat rides, an amphitheater and glass-enclosed stair tower. A Disney Epcot designer consulted. A carousel ride and ice rink were installed. Shut down in 1995, it was a financial disaster, but accomplished the renovation of many of the buildings.

Those renovations benefitted the National Park Service, which in 2000 made it a visitor center for its local sites, and in 2006 a nonprofit now known as the American Civil War Museum moved into the old cannon foundry.

With it now serving as the site of music festivals and engagement photos, Madison laughs at the irony. “A hundred and fifty years ago there were [these guys], filthy, grimy, dodging hot iron and machinery, fingers cut off,” he says. “They’d be thinking, ‘People are going to get married here?’” S

“Tredegar Iron Works: Richmond’s Foundry on the James” is available for purchase at Historic Tredegar and the Valentine museum gift shops. Madison will speak at Patrick Henry Pub on April 12 for the American Civil War Museum’s history happy hour.