Charlize Theron digs for another atypical role in the mining movie "North Country." 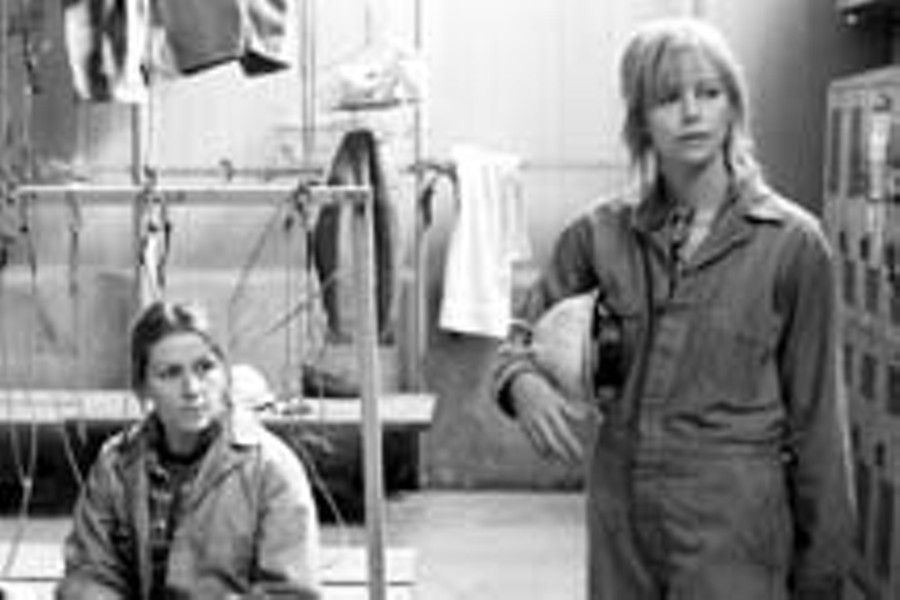 Theron plays Josey Aimes, a single mother seeking refuge from an abusive husband. Looking for shelter amid the bars and double-wides of this snowy, remote Minnesota mining town, Josey gets one of the few bits of good news of her life when she runs into a high-school acquaintance named Glory (Frances McDormand). Glory invites Josey to work at the local iron mine, much to the chagrin of her father (Richard Jenkins) and worry of her mother (Sissy Spacek). But Josey, thrilled at the possibility of earning a living for herself and her kids, is too pleased to notice what everyone in the audience understands will be her downfall.

There aren't enough jobs to go around without hiring women, she is told, with the additional warning that "these men are not your friends." You can say that again! When not hooting like the evil monkeys from "Planet of the Apes," the men of the mine are drawing crude and suggestive cartoons on the walls, smearing the women's shower room with excrement, ejaculating into their lockers or forcibly groping their female co-workers. They even upturn a full portable restroom on one of them.

Josey is based on Lois Jenson, who began work at Minnesota's Eveleth Mines' Forbes Fairlane Plant in the early spring of 1975 and sued for sexual harassment in a landmark 1988 case. The book, "Class Action," recounts versions of all the above abuses and more, including an instance where a women was forced by her male co-workers into the woods to perform sexual acts.

Caro and Theron do a good job of getting sympathy for Josey, a sad-eyed young woman who seems to believe that something good is in store for her in the world, even if she is not sure what it is or where it will come from. Theron, though given plenty of chances, doesn't overdo it. Her Josey seems a natural product of the area, with a spine that could have been wrought in the mine. Anyone who's ever written anything knows the temptation to glamorize, and with material like this, it must have been especially difficult to maintain a sense of realism. "North Country" eventually becomes a triumph story, and Josey's trials eventually take over the real person. The triumph becomes the preoccupation and the real person falls away.

"North Country" has its predecessors, movies like "Norma Rae" and "Silkwood," and tries to invoke their spirit — a little too much, actually. At one point, a theme song accompanies the fed-up and feisty Josey as she marches into town for a showdown with the big bosses. It's a scene that's been rehashed and parodied in movies and television enough to seem ridiculous today, and it is one of many that feel unnecessary. Needless to say, there is not much actual mining going on in "North Country." There isn't much precedent for that. What is familiar, and used familiarly, is a lot of courtroom melodrama.

The friend I went with overheard some women in the ladies' room complaining that these scenes, complete with antagonistic cross-examination and an elderly, no-nonsense judge declaring order in his court, seemed pretty phony. They did. Some of the staging is outrageous enough to make Matlock blush. But a better question might be: Aren't courtroom scenes played out? Woody Harrelson, playing a former hockey star turned lawyer, gives a rousing courtroom speech on guts. If only it could be given to movie producers. There are few scenes in "North Country" that rise above a made-for-television movie, but most of it is cable-ready. If you want to dig deep enough to unearth real people, you have to be willing to get a lot dirtier. (R) 123 min. ** S