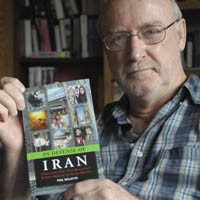 The rush to find the perfect Christmas gift is over, so may we recommend an ideal Valentine for that special someone?

“In Defense of Iran,” a new book by local journalist and peace activist Phil Wilayto may not smell as sweet as a dozen roses, but your special someone is certain to learn a thing or two about why opposites attract.

The book's simple premise, he says, was to take the filter of politics and nationalistic egoism off of American's periscope of Iran, its people and government.

“[I] wanted to do it in defiance of the [President George W.] Bush administration's portrayal of Iran as a hostile country to Americans,” says Wilayto, who also publishes the Richmond Defender newspaper and is a founder of Richmond-based Defenders for Freedom, Justice and Equality.

In preparing for the book, Wilayto did the international travel version of speed dating — an intensive eleven-day, 1,700-mile tour of Iran in July of 2007 with a small delegation, followed by countless hours of research back home. It was hardly enough to make him the definitive expert, he says, “but what we did learn was that the popular image of Iran is completely inaccurate.”

That image, one of “very oppressed people — very fanatical and probably hostile,” Wilayto says, was “exactly the opposite of what we found.”

In fact Iranians love Americans, says Wilayto, they just have a funny way of showing it at the United Nations.

“We felt perfectly at ease no matter where we were in the country — including during a chance encounter with 300 members of the Revolutionary Guard about two months before the Bush administration declared them a terrorist organization,” Wilayto says.

That's not to say Wilayto gives Iran and its sometimes hyper-charged political rhetoric an easy pass: “There's something here to offend everybody,” says the author.

But while picking through the prickly geopolitical love-hate marriage that has been U.S.-Iranian relations for the past 29 years, Wilayto dissects some surprising inaccuracies about Iranian culture.

Wilayto found an Iran where contraception is encouraged and free to all; where gay sex is outlawed, but where the government subsidizes sex change operations and social programs for transgender citizens; and where state opposition to abortion is similar to policies in Ireland.

“Iran has the only state-sponsored condom factory in the Middle East,” he says. “Favorite color, pink. Favorite flavor, mint.”

Fifteen chapters and 40 pages of carefully researched footnotes later, Wilayto says, and detractors may think he took a sip or two of Iran's state-sponsored Kool-Aid. But he wears no blinders in his view of Iran — or of the United States.

“Does this mean everything [in Iran] is great? No,” says Wilayto, of his book's conclusions. “It just means things are far more complex there than we are led to believe by our government.”

The book is available at Chop Suey Books in Carytown and online at www.defendersfje.org/dpi.