After two brain surgeries Tom McGranahan was left wordless. Then he wrote a book. 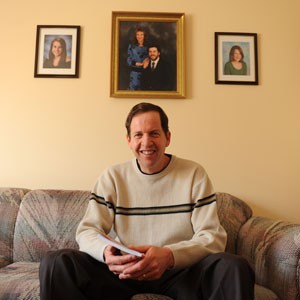 Tom McGranahan once woke up lying face down on a dark basketball court, alone. He got up and pedaled home, wondering where the friends he'd been playing with had gone. “I went to play ball the next day,” he says, “and nobody brought it up.”

McGranahan had experienced an epileptic seizure, one of thousands that punctuated his life by abruptly switching off his consciousness. He was used to it. He was also used to other people in his life pretending not to notice.

People are better educated about epilepsy today, says Dr. W. Stephen Corrie, an associate professor of neurology and director of the epilepsy monitoring unit at Virginia Commonwealth University Medical Center. But, Corrie says, “there are people who still have some fear of it.”

McGranahan wanted to reach out to others with his neurological condition and explain epilepsy to the public, so 10 years ago he decided to write a book.

First, though, he had to relearn how to write.

When he was 10, McGranahan was playing kickball with a neighbor when he fell and smashed his head on the corner of a brick, leaving a scar on his brain. He had his first seizure a few months later. The next three decades would be punctuated by thousands of incidents in which McGranahan suddenly lost consciousness.

Once he collapsed in a hospital elevator just before his daughter Mariah was born. Once he plunged from a second-story deck. Once he came to behind the wheel of his totaled pickup truck. While driving on Interstate 95, he'd crossed the median, hit a white station wagon in the opposite lane and then smashed into a tree. None of the 11 people in the station wagon was hurt.

He was driving legally, he says, because he had been seizure-free for more than six months. He believes God protected him and the other car full of people. Then again, he says: “I could be wrong. I know that, too.”

“So many times I could have lost him,” says his wife of 26 years, Angela McGranahan.

Medication gradually lost its ability to control his seizures. In 1993, McGranahan's doctors at the Medical College of Virginia (now Virginia Commonwealth University's Medical Center) recommended brain surgery. He was reluctant, given the risks, but Angie, his wife, reminded him that he'd come close to dying from seizures 28 times.

For 12 days, McGranahan lay in a too-short hospital bed with grids on his brain and wires in his mouth. Doctors were waiting for him to have a seizure so they could identify the part of the brain responsible. On the 13th day, it happened. Surgeons removed part of McGranahan's left temporal lobe.

It didn't stop the seizures. So again in 1994, McGranahan had a golf ball-sized piece of the lobe removed. (Style Weekly published a story on McGranahan's ordeal that year.) The second surgery, along with precisely calibrated medication, worked. McGranahan's last seizure happened in November 1996.

But the procedure left McGranahan's mind in disarray, because the left temporal lobe is the language center of the brain. He had to relearn English, eating up verbs, pronouns and adjectives like popcorn. He'd also lost his ability to filter information. When McGranahan attended his grandmother's funeral, the flood of memories unleashed by seeing his relatives left him unable to utter a word.

McGranahan hated being labeled disabled, but his epilepsy limited his ability to work. The only jobs he was able to get were low-level clerical positions, such as envelope stuffing and filing.

He eventually opened his own painting business. While he worked in solitude, he says, his brain began to rewire itself. “I kept thinking about advocacy,” he says. “It wouldn't go away.”

So slowly, painfully, McGranahan started to write a book explaining his experience. Just to write just one sentence required five or six tries, he says. He interviewed his wife about all the times she stood watching helplessly while he struggled in the throes of a seizure. Sometimes, Angie says, her husband would ask, “‘I did that?' And we both kind of laughed about it.”

This year, after 10 years of painstaking writing, rewriting and editing, McGranahan has self-published “Under Siege: Living Successfully with Epilepsy.” He's selling the book online.

“The thing about epilepsy — no one can see it,” McGranahan says. But he hopes his book will help people understand it. S