The fate of publicly funded art at the Altria Theater is up in the air. 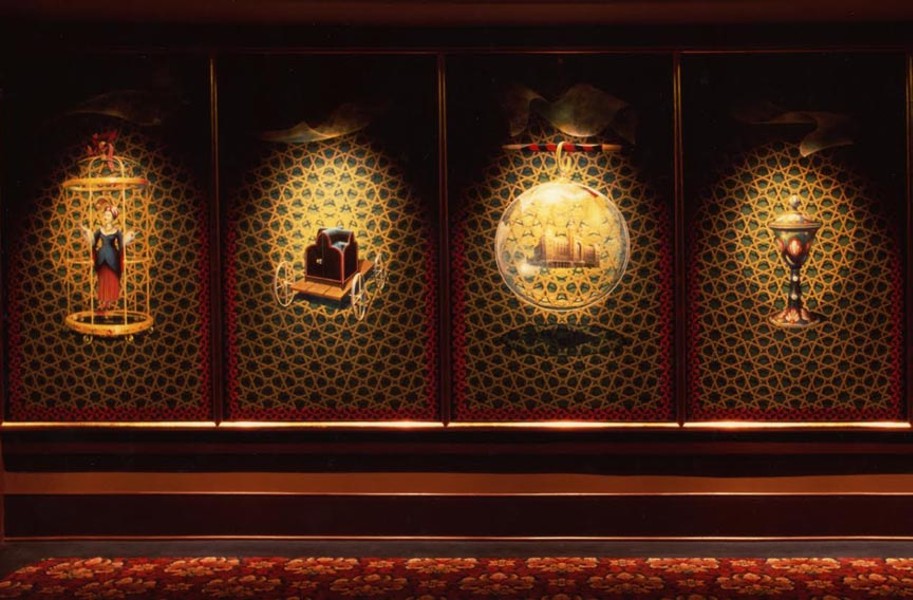 Eric Norbom The artists who created “The Conjuror Revealed” say no one told them their pieces were being relocated, as specified in their contract.

When the Altria Theater reopened last week, it showcased a $63 million renovation full of grand improvements, beautiful design and new amenities. But two pieces of publicly funded art were nowhere to be seen.

One of them was "The Conjuror Revealed," by Richmond artist Rob Womack and his partner, Catherine Roseberry of Coloratura.

The five, 5-foot-tall panels were installed in an upper-level lobby of what was then the Landmark Theater in late 1995. At the time, Womack enthusiastically described how patrons would react to the wildly colorful and intricately patterned work: "I want them to feel this sense of the magical, that we've pulled off this magic."

He never envisioned a disappearing act. But at the Altria unveiling last week, the space that "Conjuror" occupied for 19 years was retrofitted with a large wet bar.

Don Summers, acting chief projects manager for the city of Richmond, says the piece is in storage on site. "We are looking at a couple of spots to reinstall it," he says.

This was news to artist Roseberry. "We were never told," she says, "although our contract clearly states that, as the artists, we would be contacted and consulted if the piece was ever moved or altered in any way."

"Conjuror" was commissioned for $18,500 through the Percent-for-Art program. Overseen by the city's Public Art Commission, the program is meant to ensure that public art is included in the budgets of new or renovated construction of more than $250,000, according to the city. One percent is earmarked in the capital budget to put toward the art.

Also missing from the Altria's former box offices on Laurel Street was "Grilles," by Richmond artisan David Shea. The 1995 piece, commissioned for $10,000, included six sets of brass grille frames containing images of dancers backed by a milky Plexiglas. They graced the ticket windows, three facing the lobby and three opening onto Laurel Street.

A spokesman for CenterStage, the Altria's managing organization, says that work was long gone before the renovation.

"Grille was actually removed from the facility in the 1990s after it was vandalized," Jay Smith says by email. "When the outside portion was damaged, the entire piece was removed. That was long before CenterStage became involved with the theater."

It isn't clear whether the piece is being stored or was destroyed.

A member of the Public Art Commission, Sarah Driggs, was shocked.

"What? How could that have happened?" she said, citing shifts in administrative oversight of public art installations. "There is no institutional memory, there's a lack of continuity." S