In Richmond's urban forests, the toughest team on 10 legs performs feats of strength.

Not the eye-glazing key pecking that most of us call work. Not the endless sitting and clicking and tapping.

This is work: a man and two huge horses, moving trees.

A huge June storm felled a broad, old chestnut in Susan Winter's steep, wooded backyard near Cary Street Road. It's been lying in the ivy, leaves browning, since then.

Art and Chain, two handsome draft horses, stand harnessed together to a logging arch, a small, wheeled contraption that lifts the end of a log off the ground. Their owner and partner, Ryan DiMarco, chains the log to the arch and the horses begin to pull.

The log snags. "Back up," DiMarco says. "Back up. Whu-oh." The male horses do, and then they're off again, moving quite jauntily for 4,000 pounds of beast.

Winter is delighted. She didn't ask for horses; she just needed two trees gone, the chestnut and a leaning white oak. Then Scott Turner, owner of TrueTimber Tree Service, told her about DiMarco. "It sounded like a great adventure," Winter says. After putting on her wellies, she follows the team into the trees. "They've made a wonderful path," she observes. "That's another bonus."

The woods are fragrant with manure ("bio-fuel," DiMarco jokes), freshly turned earth and crushed ground ivy. The horses trot down the sun-dappled path, wheels creaking and chains rattling. Despite a chain saw's distant complaint, the scene feels perfectly peaceful, something lost long ago.

Yet horse logging isn't picturesque, but practical. Just like John Henry, the steel-driving man who beat the steam drill, Art and Chain have an edge over modern machines.

A tree company might try to get a skidder — a knobby-tired piece of heavy equipment — through the narrow passage and down the steep slope in Winter's backyard. "We could," Turner says doubtfully. "It would just tear the place up." The other option is to bring in a crane to lift the logs over a neighbor's roof, a proposition more perilous and several times the cost of horse logging.

The horses have other advantages. They can work in 18 inches of mud. They run on grass — a quarter-acre every two days. And compared with machinery, they tread lightly on the earth.

An 80,000-pound skidder wreaks invisible havoc on a forest, DiMarco says. You can't drive one in, take out one tree, "and expect the other trees to live." The heavy tires compact the earth, killing the tightly packed roots. If a skidder removes half the trees, the rest are more likely to blow over the next time a hurricane tears through. "And that's good job security for the logger," he says wryly.

Art and Chain leave only hoof prints and scraped earth in their wake. "Aren't they beautiful?" Turner says in wonder, watching DiMarco and his team jingle and creak through the woods.

A normal load is 2,000 to 3,000 pounds, DiMarco says: "I can pull those all day." Striving hard, Art and Chain can move 8,000 pounds across 30 feet. They won a horse pull in Lexington doing just that. Eight thousand pounds. That's a female elephant. That's a Hummer H2, minus the tires.

As powerful as the horses are in motion, they stand remarkably still in repose. They stand and wait, stamping their feet gently, whisking their tails. A word from DiMarco, and they're off again.

This morning, DiMarco decides they'll pull a chipper — about 5,000 pounds — down through the woods to Winter's yard, instead of having the horses haul all the brush up to the road. He hooks up the horses, they take a step — and the hitch snaps in two.

"Guess it was a little heavy there," DiMarco says. For the steel. Not for the horses.

By late afternoon the team is weary. Chain refuses to walk up the hill. Dogged Art keeps going. At last, both trees are gone. The day's work is done. 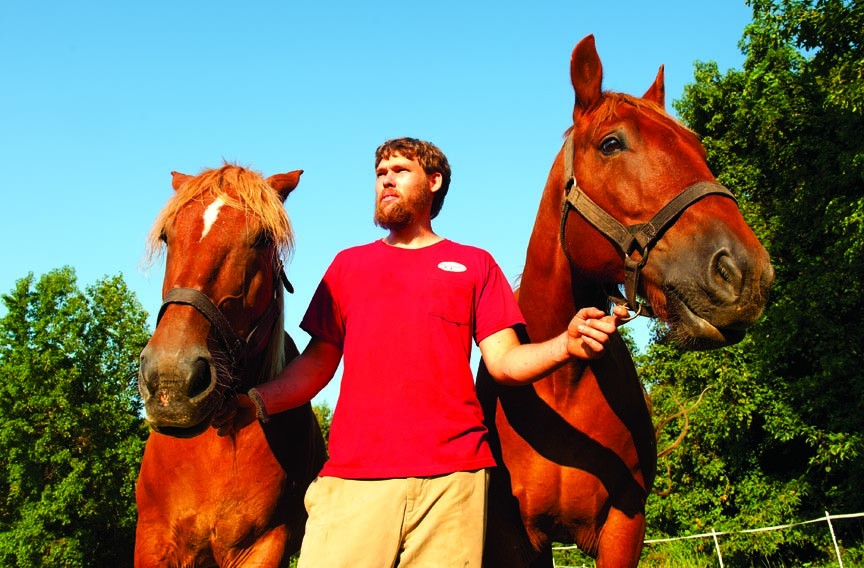 Art's a businesslike beast. When he's working, he disdains apples and caresses. Nor does he like having people on his back. Always harnessed on the left, Art is the boss; Chain follows his lead.

Chain, the blond with the white star on his forehead, is more inclined to dawdle. He munches on leaves, looks around and submits good-naturedly to nose petting. While waiting for a command, he bobs his head as if he's listening to his favorite log-hauling play list.

Art was born in Ohio; Chain in Floyd County. As different as they are, "they're buddies," DiMarco says. And they like logging. "In the morning, before work, they stand in the field and stare at me," he says. Their reward for a hard day is getting pressure-washed.

They're both 7-year-old Suffolk punch draft horses, weighing close to 2,000 pounds apiece. The Suffolk punch is an English breed dating to the 1800s, bred for stamina, strength and docility. Little known in the United States, there are perhaps a thousand of them in this country.

When DiMarco bought the pair for $6,000, they'd been rein-trained and were accustomed to working with each other. Just not with DiMarco. They were unresponsive and difficult, he recalls. It took six months for them to learn that he was the boss — "the big horse."

He has since taught Art and Chain more than 30 voice commands.

"Haw round," he says. They promptly circle to the left.

"Gee." They turn to the right, without a moment's hesitation, which is important. Logging is difficult and can be dangerous. Logs catch, slip, roll, slide and split — as one does in Winter's backyard while the horses begin to pull it down the hill, forcing DiMarco to leap out of the way. He watches out for the horses, and they obey his every word.

DiMarco even trained them to respond to an electronic device he wears on his belt that emits vibrations and tones audible to horses but not humans. When DiMarco's voice is submerged in the roar of saws, the horses still know when to start, stop and turn. "I push a button, and it happens," DiMarco says.

They have learned the rhythms of logging so well that sometimes, they don't need his commands. If Art and Chain are working singly, he says, one carries his load to the waiting truck without being told. Once unhitched from his burden, he returns to fetch the next.

And they are implacable — or nearly so. Dogs and chain saws fail to faze them. Plastic bags, on the other hand, can inspire terror. "They think it's a monster, or a ghost. It's going to eat them," DiMarco says. The sight of bouncing branches on the logs they haul can trigger panic, because the horses think they're being pursued. They wear blinders to keep them from being startled. 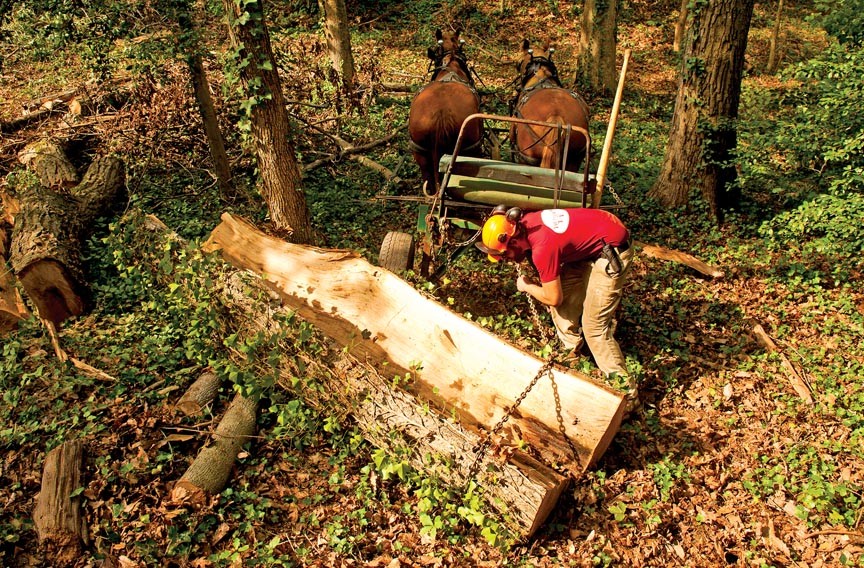 At Winter's house, there's one obstacle. A dry gully runs across the neighbor's yard, below the slope that leads up to the road and the waiting chipper. The sure-footed horses can manage it, but the wheeled logging arch can't. So DiMarco lays down sheets of soft and weathered gray plywood.

The horses don't like it. Not at all. "Slippery, huh?" DiMarco asks. "It's slippery, isn't it?" Art snorts disgustedly.

DiMarco touches his team gently, settling them. He treads on the plywood to show the horses how it's done. They're thinking, "Ryan's walking on it. Must be safe," he explains. "I've built a relationship with them where they trust me."

After a moment of hesitation, the horses charge across the gully, up the hill.

As much as the horses trust DiMarco, he trusts them. "If they can't gauge it, they're not going to pull. ... There's not anything you can do to make them go," he says. "When we get home, we're going to practice walking over plywood." 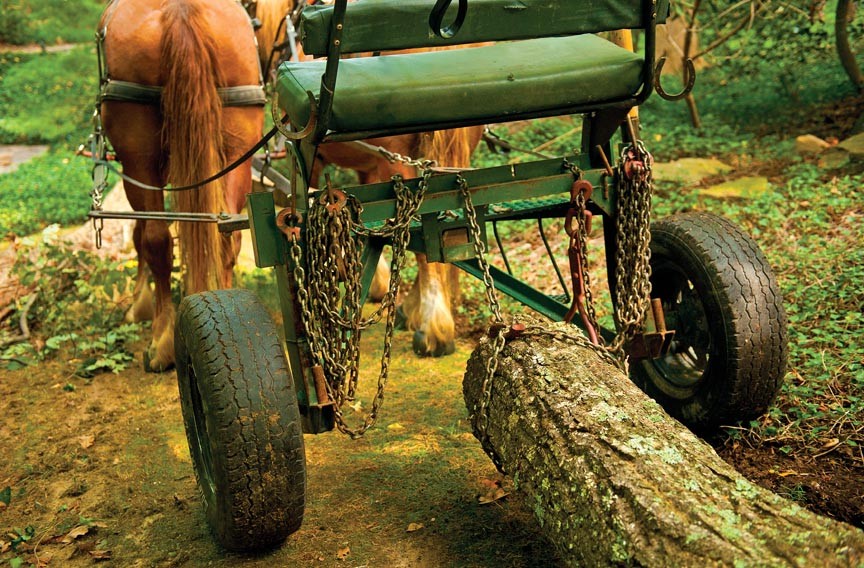 Ryan DiMarco is a working man.

The 25-year-old was born in Richmond and raised in the West End. His soul belonged elsewhere. "I thought I was going to live in the mountains and be a hillbilly," he says. His mother refused to take him on vacation to places like North Carolina and Tennessee, for fear he'd move there and she'd never see him again.

In high school, DiMarco ran a landscaping company. We're not talking about mowing lawns — he employed entire crews. But it was a headache, he says. "It was hard having older people work for you when you're young."

After school, he learned small-engine repair, and studied diesel mechanics and welding at Ohio Technical College. But he tired of machinery. He was made to be outdoors. "I can't stand to sit and watch TV," he says. "I'd rather go out and do hard work outside."

He worked with TrueTimber for three years, becoming an arborist and a climber — the guy who ascends, harnessed, to lop off limbs and help bring huge trees down. A friend told him about horse logging, and he couldn't get the idea out of his head. He loved horses ever since his mother started him with English riding at age 6. He loved tree work. "I just put them together," he says. So he became a certified biological woodsman and started James River Horse Logging.

"He said he was doing it," says Turner, the owner of TrueTimber. "I didn't believe it." Once Art and Chain were trained, DiMarco showed Turner what they could do. TrueTimber now brings in the horses frequently on jobs around Richmond.

While DiMarco does some work in rural areas, his true calling is urban logging. Art and Chain are at their best in places like Winter's backyard, in tight spots or swampy, muddy areas.

DiMarco could sell the trees he removes as green-certified lumber, which is much in demand by architects. But the effort and cost involved means that most of the time, the lumber becomes paper instead. 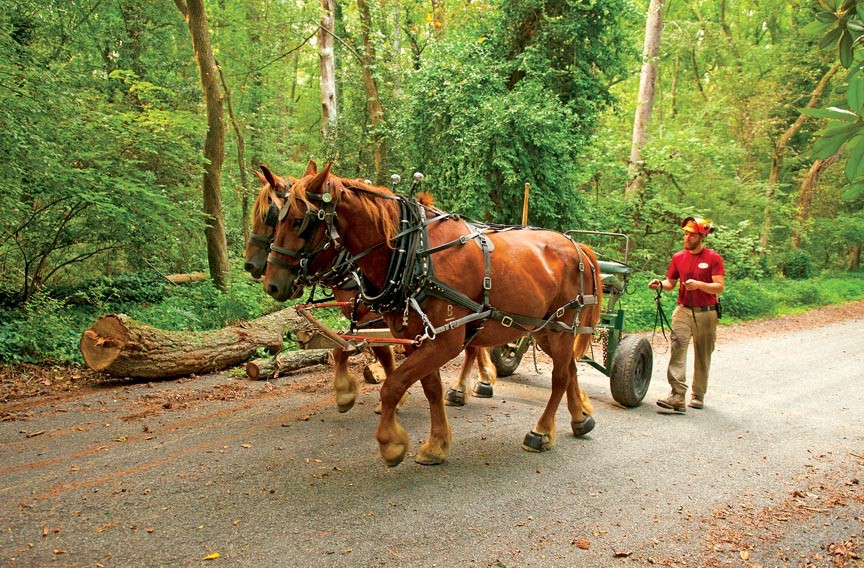 Draft horses live to be 25 or 30, and typically stop working at age 16. But DiMarco intends to retire these two before that. One day he hopes to have several teams. Art and Chain, the seasoned loggers, can help train the green ones. He's thought, too, about operating a carriage-ride business in Richmond. Mayo Island would be the perfect base.

DiMarco lives in New Kent County in a ramshackle, nearly 200-year-old farmhouse surrounded by a black walnut grove. The 12-acre property, a former dairy farm, has plenty of lush pasture for the horses. On a recent morning, a blue heron flaps lazily overhead. The neighbors' beagle, Trigger, bays in the field. Art and Chain stand side by side in the grass, chestnut coats gleaming in the sun.

They're ready to work. S

See Art, Chain and Ryan DiMarco in action at the Field Day of the Past from Sept. 21-23, at 1741 Ashland Road in Rockville. The team will perform demonstrations all three days, skidding logs and loading them onto a truck. $10-$15. 741-8468 or visit fielddayofthepast.net.